Ok, I love the Jack Reacher books, the Tom Cruise movie adaptation was better than I thought and I am interested in the sequel, so when I heard there was a game out, I just had to have a look and here it is: Jack Reacher: Never Stop (Punching).

The Google Play descriptions says it’s an 8-bit side-scroller, with Reacher described as ‘an unstoppable force who has nothing to lose and everything to punch’. The game is a nod to the punch first, ask questions later persona of Jack Reacher who tends to get involved in more than his fair share of fights. He doesn’t usually start the fights, but he does usually win them, so it’s fair to say he has reason for doing a bit of punching.

You can give the game a whirl on the web first using ‘Z’ to punch and ‘X’ to jump on the Jack Reacher website. Jack Reacher hits cinemas on October 21st if you’re looking to fill your time between now and then you can head over to Google Play and grab it now. 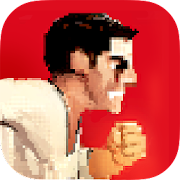