With the introduction of Allo, Google also showed off a mysterious new ability to send messages to people who don’t actually have the app. A page on Google developers has shown off what the new voodoo is, App Preview Messaging.

The new feature allowed Google, and soon select partners, to send what looks to be a native message to devices that do not have a native app installed. The feature, which utilises Google Play Services to handle the heavy lifting, can be deactivated by users if they so desire.

Reading between the lines when using Android Google will map your phone number, and when one of your contacts (also on android) attempts to send you a message from an app you don’t have it will match you number to that message and send you an App Preview Message. 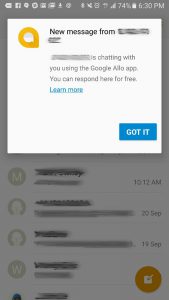 As shown above, the message shows as native notification and will let you install the app, ignore it or reply to the message. This is simultaneously cool and possibly spammy. By restricting access to the service for now the spam issue should be kept to a minimum at least initially. Hopefully, Google figures out how to keep the nuisance factor to a minimum – though being able to disable this should help.

Google Play services have been a universally wonderful system to allow Google to roll out more and more features to users who’s devices are stranded on old versions of Android for whatever reason. Using it to spearhead new and innovate features can only be good for Android as a whole, if done right. Google will be opening up the API in the future.

This is brilliant! I’ll be able to uninstall all the chat apps I don’t use, but I have to keep, as other people still use them (assuming the chat apps implement this feature).

this almost looks a bit like the idea of “instant apps” giving you the ability to perform functions of the app with out it being installed.