After leaking the first official looking render for the HTC built Google Pixel yesterday, Evan Blass has leaked a render for the Pixel XL today, and surprise surprise it looks exactly like the Pixel…but bigger.

The two phones are essentially the same in terms of design as we’ve been hearing since Android Police first leaked their mock-up design. While the renders don’t show the rear of the phones with the interesting glass or plastic rear panel, from the front they look like they have plenty of bezel if that’s the sort of thing you stress over. Scaled for size the phones look sort of like this: October 5th is coming around very quickly, so it won’t be long till we find out the official specs and see what else Google has to offer for their new Pixel phones.

Looks like when you put the render next to the 6P the bezels are the same size. Just a smaller footprint because of the screen size which I could be alright with. 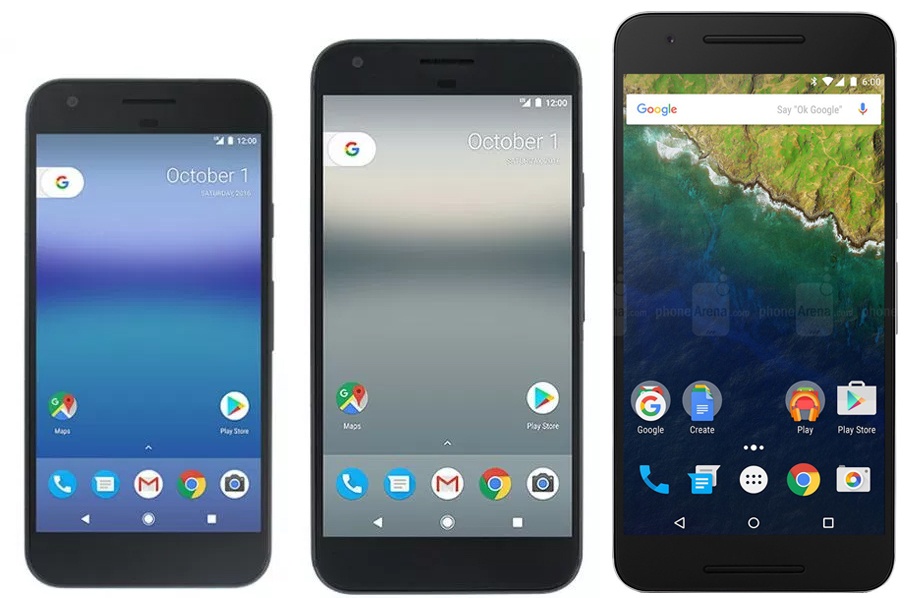 So the Pixel is still 1080p despite the extreme price? Are we certain of that?

You can hardly call it flagship standard if it doesn’t at the minimum sport a 1440p display.

So I can get two G5s for the price of a lesser standard Pixel?

1. A 1080p display will mean better battery life
2. The iPhone continues to avoid QHD and higher. Unless VR is an absolute must, extremely high resolution mobile displays just mean unnecessary power consumption. You can barely see the difference.
3. The “lesser standard” Pixel will keep getting updates long after the G5.

1. Doesn’t make it more expensive.
2. Comparing with an overpriced phone doesn’t make it any better, and VR IS a target of this phone, via daydream, so …
3. Even if the G5 received updates for half the time of the pixel, it would still be better value for money. As it is there is talk of LG bringing nougat to the G3 – a 2014 phone.

Resolution is just one element of a display. A higher resolution doesn’t automatically make it better. You also need to account for contrast, black levels, colour gamut, white balance, viewing angles, and plenty more. The Pixel phones are expected to come with OLED which by most metrics trumps the LG G5’s IPS display. VR is very likely going to be a target for the Pixel, as you say, and the LG G5 will absolutely benefit from its higher resolution. However the Pixel XL is coming with a QHD display and will therefore be the phone to go for if you’re… Read more »

Looks fine to me.

Just wondering what the prices will be in Australia.