Home Mobiles Google is getting serious about advertising the Pixel – it’s even popping... Google is taking a new direction with their phones this year, rather than developer focused handsets, Google is taking a shot at the high end and what better way to tell people about their new phone than talking about it on the homepage.

There’s no link on the page, rather users of Google are getting a notification popping up asking if users want to pre-order the Pixel phones. I’ve had it show up regularly on mobile, and once on desktop with a couple of other users also seeing the alert on mobile. The alert looks like this: 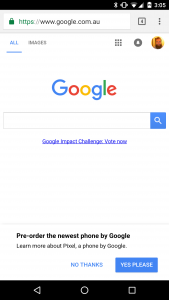 If you choose the No Thanks option you’re free to use Google, if you decide you want to know more about the Pixel you’re taken to the Australian MadeByGoogle site.

With a premium price, Google is going all-in on the Pixel advertising in a physical sense as well with physical and electronic billboards all over Australia:

Google is also heavily investing in TV advertising as well, including spending up to $3.2 million USD in two days according to a report from Reuters. Google also plans to expand that TV advertising presence with Google Vice President of Product Management Mario Queiroz telling Reuters they may even purchase ad-space during the Superbowl, where a 30-second commercial can cost $5 million – and their current commercial clocks in at a full minute:

Though, hand it to Google, there are now two new video ads:

Google has a big sell on their hands convincing customers to give them a go when it comes to the high-end phone market, though with Samsung’s Note 7 currently not in the best of positions, that could be a positive factor for Google. Google has baked in a number of exclusive features to the Pixel phones including unlimited full resolution photo/video backup to Google Photos and camera features like Smart Burst and Lens Blur, the infamous Google Assistant, 24/7 customer support and an easy switching feature to help new users bring all their data over to their new phone, whether these exclusives are enough though is the question.

It seems in the enthusiast market there’s not a lot of love for the Pixel phones, whether Google can convince more everyday mobile customers into giving the ‘Google Phone’ a go remains to be seen. With this much money being invested into customer awareness programs, whether their strategies work or not we’ll find out in one of Google’s financial calls down the track.

Where have you seen Pixel adverts? Send us a photo

I had a brain fart and thought 1k plus tax refund and 300 unexpected dividend pays for it so I thought order from Google. Remembered last moment they probably charge overseas so that’s another $40 plus for fees so they can avoid taxes. I asked them where they will process their credit cards as I want to avoid an overseas transaction fee, their response, 5 times even after escalating to senior management “Google charges no extra fees or other amounts” Still now answer as to WHERE they will bill my card. They don’t understand what WHERE means. Google is actively… Read more »

No it does not.
I finally got a confirmation they charge in Singapore for all play purchases.

There is not GST on past hardware purchases from google device store.
Ie if you pay the 1100, there’s no GST portion for you to claim if you’re buying it through a business.
Last I checked they charge you AUD but payment is taken via Google Singapore. So not international Transaction fees for you on your statement. And not GST paid by Google to the Australian government.

Are you saying that if you buy this phone from the Google Play store you are not charged GST??

That’s how it was when I bought the nexus 5 and nexus 6. I can’t be sure on the pixel as I’m not buying one, but from past experience any hardware purchased from google Australia is charged via Google Singapore and is therefore does not have a GST component. So I can’t claim the $100 back through the company purchase.
If you buy from JB or a proper local retailer there is GST.

Which is tax avoidance and google claims they pay the GST to the ATO. LIES!!! This is the evil side of Google, that company who’s policy is “Do not evil”

And that’s where your extra dollars go… to funding the billboards.

*some of your extra dollars

I didn’t get a shot, because I was rushing between platforms, but they’re now showing up on the cycling digital ads on the Flinders Street Station concourse here in Melbourne. They’re certainly going all-in!

Only way google wins big is if they can get Telstra to push the Pixel hard to everyone that come looking for an Iphone 7. I doubt the website sales will be more than a couple hundred people in Aus. Brand recognition for next year?

Well Telstra are certainly gearing up for a big launch. A lot of our internal communications is showing that we’re going to treat it like an iPhone Launch. They’ve even put the pixel on the home page of the website in the banner ad that an iPhone usually occupies. All in all, that shows Google have thrown some serious money Telstra’s way and expect them to deliver results.