Android Wear is a luxury for many users, it’s not a necessity but once you’ve had it it is tough to hand it back. The unnecessary luxury is quite possibly one of the driving reasons that many of the top end watch manufacturers didn’t get on board when Android Wear became available in 2014. In the last 8 – 12 months we’ve seen a huge shift in that attitude from unnecessary luxury, to necessity with more premium Android Wear devices becoming available such as the Fossil and Michael Kors devices.

The Michael Kors range of Android Wear devices recently brought to market, really do give a feeling of style and class that is well above any of the other devices I have used. The fact that they are pushing into the Android Wear space with a range of good looking and stylish options is a great thing for the platform.

So when the Bradshaw became available for review in gold, the opportunity to check out some new bling was too good for me to pass over.

The first thing that struck me when I opened the box (other than how darn big the box is…) was the look of the device. It looks like a standard “business” style watch and that is a big attraction to me. It’s really slick and stylish and belongs on your wrist while you’re wearing a suit to work, it highlights the differences when tech manufacturers vs watch manufacturers create a smartwatch.

The Bradshaw isn’t the slimmest of watches but being a fairly stocky bloke, I don’t mind that – less bulky watches can start to look like I couldn’t find mine and borrowed my wife’s watch. The depth of the device from wrist to face is very similar to my daily driver (Moto 360) at 14mm, so this isn’t a device for everyone. The other striking thing about the feel of the watch is that it isn’t just chunky, compared to other Android Wear watches it is also rather heavy tipping the scales at 114grams. Despite the size and weight, I found that it was a really comfortable watch to wear all day.

Part of where the weight comes from on the Bradshaw is the fact that you’re dealing with a gold plated watch and a really nice, solid clip that isn’t going to come undone by accident putting you at risk of damaging or losing your device. If you’re not a fan of the supplied band (and like wasting a fair chunk of money given the value of gold…) you can easily replace it as it is standard pin mountings, easily changed at home or at your local jeweller.

As is the standard with other Android Wear devices, the Bradshaw has a single press button (which looks like it should turn as it would on a business style mechanical watch) to allow you to turn the device on and off, long press for settings. It certainly looks like it belongs on this absolutely stunning piece of hardware.

The display is a lovely large display at 44.5mm wide with a 320 x 290 resolution on it. which handles display transitions really well and very smoothly. The resolution it carries puts it down slightly on the 400 x 400 resolution of something like the Huawei watch, the other reasonably dramatic downfall I did notice that compared to some other Android Wear devices I’ve tried in the past it’s not quite as crisp an image as I would expect – particularly given the price of this one.

The crispness of the display isn’t the biggest issue for some users though, as was highly criticised with the Moto 360 series of watches it has a flat tyre. The practicality of this is simple, it’s got the light sensors in it and they are a necessary evil for the device to be really functional in varying light conditions and perhaps more importantly not burn your eyes out when you’re in a dark room. The reality of it is that some users find the flat tyre unsightly and it will be a deal breaker for those people. Personally having had a Moto 360 for some time, i’m used to it and it doesn’t bother me but I do see the attraction of the full round face on other devices.

One of the problems with smart watches is their visibility in bright lighting conditions. This is where the aforementioned flat tyre comes into play, with the sensors are more centralised to the display and less likely to be obscured by a shirt cuff or jacket sleeve allowing them to react better to changes in light conditions and this is done extremely well on the Bradshaw. The designers for the Bradshaw have done an outstanding job of making this a stylish and functional piece of hardware.

Aside from the obvious by way of the face and stylish band, the Bradshaw has a couple of secrets hidden away in the hardware. The microphone was very good and (coupled with being a fresh release device) which has meant that the voice activation has been far more accurate than I’m used to with my daily driver, or what I’ve experienced with other devices I’ve tested.

When it came to hardware, the surprise for me was the internal speaker that gives impressively loud, audible notifications when your phone rings or can be programmed for other notifications as well, personally I found that slightly annoying so I turned it off by about the third day. There’s a Qualcomm Snapdragon Wear 2100, 4GB of storage, 512MB of RAM and has (the expected) Wifi and Bluetooth support for connectivity.

Perhaps the best bit of detail in the hardware for me was the charging solution, similar to the Moto 360 which is my daily driver Android Wear device but delivered on a level far beyond it. The USB based charging cable has plenty of length to it, an LED indicator on the USB connector and a small magnet in the back of the charging head to ensure that once connected the charging won’t slip out but can still easily be disengaged. The charging head is a near identical size to that of the Apple Watch which means it will fit into any accessories or charging stations that you may have around your home as well.

The downside to wireless charging is the speed… or lack of, if you’re looking for a quick top up charge late in the day you’re looking at the wrong watch but the battery life has been more than sufficient for even my heaviest days of use so it wouldn’t be a foreseeable issue for many users to kill the battery in a single day of use.

Daily use for me is a lot of notifications, I’m not a fan of carrying 2 phones so I have all of my personal, Ausdroid, SES and work emails, calls, SMS (and other messaging) as well as monitoring notifications going to one device. So it’s little wonder that I have killed batteries in a single day I guess…

The 360mAh battery does a great job of managing my daily needs with power to spare, unless it was a particularly long day or extreme use day I was charging the watch at the end of the day with around 30% battery left which is a great outcome for the vast majority of users. I did as mentioned above though, find the charging to be very slow so don’t go looking for a quick top up during the day..

The limitations of Android Wear are basically the fact that its a system controlled by Google. If you’re a manufacturer, you can work within the APIs of Android Wear, offer your own watch faces and that’s about it. There will be some more flexibility to this with Android Wear 2.0 which the Michael Kors devices will all see. 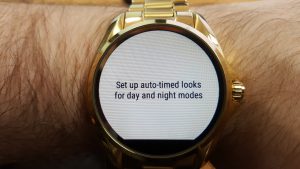 The Bradshaw watch by Michael Kors is not a low end option, as a consequence it doesn’t come cheap. At nearly $600 it’s quite a hefty price to pay for any watch but at the moment while Android Wear is really only starting (thanks to manufacturers in that space) to dabble in the higher end, stylish and business market its a great option among what is fairly slim pickings.

The watch itself is a stunning design with all the trimmings you’d expect from Android Wear to make it a really functional device, but be wary of knocking it around too much because while it is quite solid it doesn’t feel like it will take the hammering a traditional mechanical watch would stand up to.

The downside is going to be the flat tyre that will undoubtedly be a deal breaker for some users and that’s fine, it’s a matter of taste but there’s a lot to like about this too. The Qi charging solution is one of the best I’ve used and makes it a breeze to simply put your watch on charge and walk away and the screen is while not perfect, very good in bright conditions as well as low light. 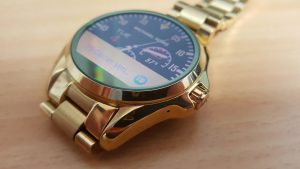 The Bradshaw (depending on exactly which one you get) ranges from $579 to $599 and can be purchased online from the Michael Kors website or at David Jones. Particularly given the cost of these, if you’re keen to learn more or check them out first hand I can’t recommend highly enough that you go in-store and get some hands on time for yourself.

Everyone seems to be making elegant or business style smart watches – I’m waiting for a sports smart watch. One that’s similar to a divers watch, such as a Tag Heuer Carrera Connected, but a little bit more affordable – around $600 is good value for a sturdy watch.

Do you know of any watches in the sports/divers style?