Google’s recent revised release date for Android Wear 2.0 has apparently set back their hardware launch plans for their own Android Wear watches. According to a new rumour courtesy of Evan Blass, the watches are still coming though.

The tweet this morning from Evan, simply says they’ll launch next year with Android Wear 2.0:

The rumoured watches, which Android Police leaked in July are codenamed Anglerfish and Swordfish.

Anglerfish will be the higher end model of the two as well as being larger at 14mm thick with a 43mm diameter face. The watch will also include GPS, LTE, and a heart-rate monitor with LTE connectivity designed to take advantage of the latest innovations from Android Wear 2.0.

Swordfish will be smaller at 10.6mm thick and with a 42mm diameter face, it may also come without the usual lugs that standard watch bands attach to. The watch will come with no LTE connectivity or GPS and may also not have a heart-rate monitor. It will have some great colour choices though with silver, titanium, and rose gold options apparently on the table.

Google of course hasn’t commented on the watches, only commenting on the release of Android Wear 2.0 saying ‘We’ve decided to continue the preview program into early 2017’. The timeline fits, and many people are eager to see what a Google Watch, a Pixel line of watches possibly will look like.

Argh, I’m still trying to decide if I install the Dev preview on my Huawei Watch…

Did it yesterday and reverted, no google fit, no 3d party apps and watch faces work, and u need to install the wear 2.0 beta apk.

Well that was very predictable, just like the other manufacturers, you don’t want to release a new watch with hardware it can’t use, or hardware requirements that could theoretically change before the final release.

The pixel phones are too small and expensive but depending on the price and features I’m keen on a new Wear watch.

> as well as being larger at 14mm thick

Is that a brick on your wrist, or are you just pleased to see me?

It had better last at least 4 days battery life for that size. Nicely done of the new money grubbing commercial google to miss the christmas present season. Now, how much was the apple watch so we’ll know what google prices these at (AU$399++)?

I think I’ll still go early on Samsung Gear S3. Given recent announcements from Google I’m wary these may be expensive without offering much more than what’s available already.

I was going to do the same, but decided to go with the Huawei watch. Got a used one on ebay for 200 – the black model.
Love it so far.
I didn’t want to pay 500+ for a watch, that may or may not have the functionality of android wear (Ie full notifications and media control on the watch).
That might change after reading some reviews and checking the app compatibility though 😉

How is battery on Huawei? That’s what worries me most about the Android Wear watches.

Pretty good actually. First day after setup I got 2 days use out of it.
That’s with always on screen disabled (I don’t see the point), but I have it hooked up to use normal Bluetooth so I can take calls on it.
Screenshot from current usage. Was at an expo all day so got alot of use. 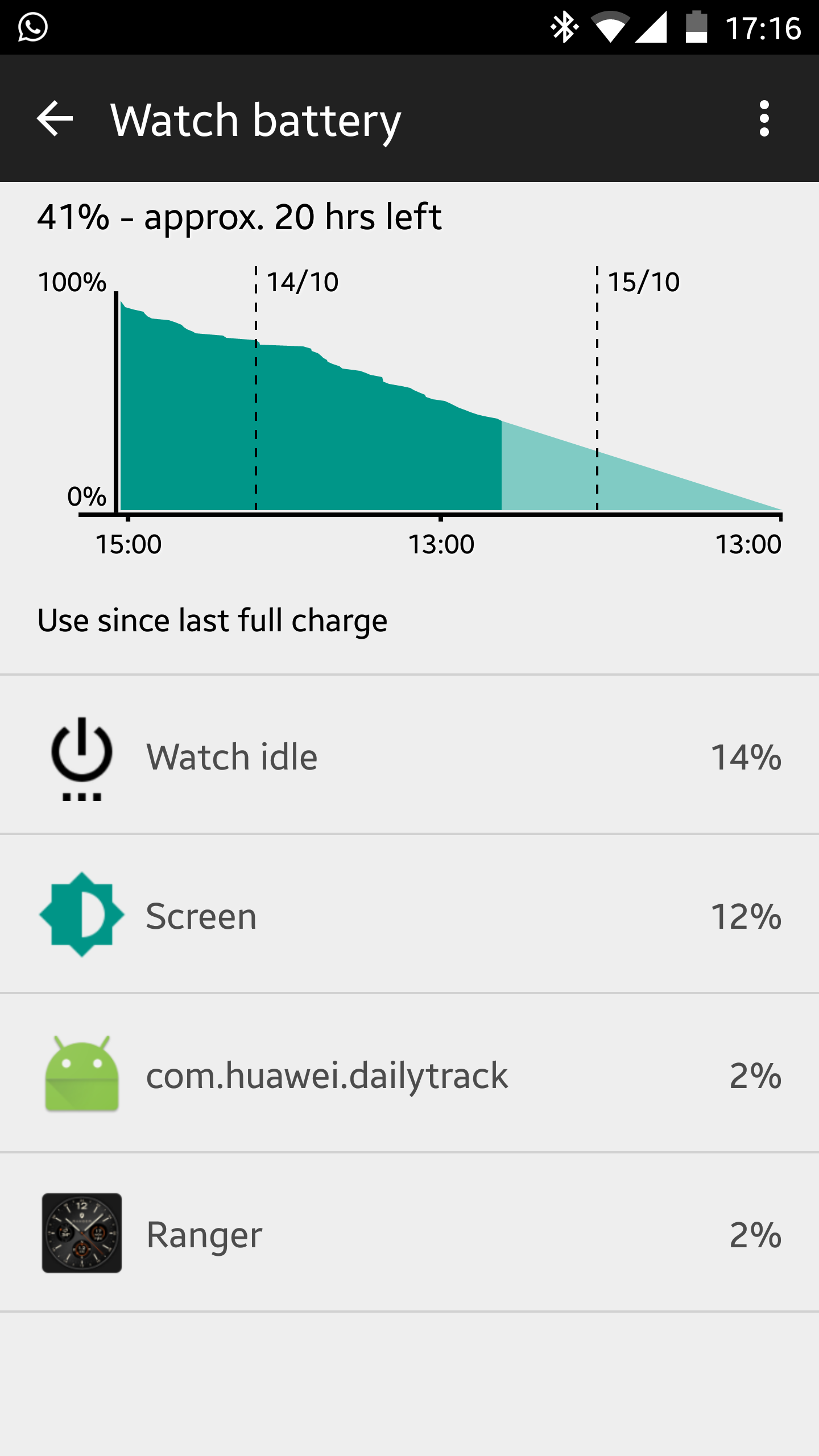