With the huge amount of news during the days it’s difficult to cover everything while still giving the important stuff the coverage it deserves, especially at this time of year.  To roll things up in a nice simple post of the small stuff, we have decided to do a single post where you can find it all.  Read on.

It’s been a big couple of days for Google fans with firstly the end of the embargo over Google Pixel phone reviews the day before yesterday. Yesterday saw it all get real, where Australians were the first people in the world to have the opportunity to purchase a new Google Pixel phone. Our intrepid Sydney-based Deputy Editor, Jason Murray, was there to record the event which saw MASSIVE Ausdroid fan Patrick (well, he is a subscriber at least) become the very first person in the world to buy a Google Pixel. You can watch it as it happened via our Periscope channel.

The rest of the day we were all focused on Pixels. Google released a new video telling me I absolutely must buy a Pixel, we found some high end cases that are more protective than anything from the Play Store (and cheaper too — Incipio read that piece and have now sent a case for us to review as well so stay tuned for that).

Semi-Pixel related we had Google release the Android 7.1 Developer Preview for select devices with others to follow in a few weeks and also the Pixel Wallpaper app to pretty much everyone via the Play Store.

Others newsworthy items that surfaced yesterday include a Pixel update coming soon (already?), Pixel phones appearing on Google Nexus support pages regarding guaranteed updates, Pixel Launcher appearing on the Play Store, a fun and clever game of “I’m Feeling Lucky” was demonstrated on the Google Pixel, and for those who like to unlock the bootloader of their devices we found out that the Android SafetyNet is now tripped by an unlocked bootloader.

Early yesterday news of a Pixel update was conveyed via the Verizon website. The update is meant to improve Wi-Fi connectivity and will update the software version to build number NDE63P from NDE63H. Here at Ausdroid, three of our staff went out and purchased Pixels yesterday (see Jason’s picture in the header) and they are all yet to receive the update so we will assume it is still in the works. Google have said that the Verizon software will be the same as Googles (plus 3 bloatware apps) so we are assuming this update will soon arrive on all Pixels worldwide.

With the release to the public of the Pixels they have appeared on the Google Help pages, funnily enough, within the Nexus section. Here it not only tells us that all Pixel phones will “get the latest version of Android directly from Google”, but that updates will be within two weeks when purchased from a retail partner or the Google Store, but purchases from mobile operators “may take longer” to arrive.

It also says that Pixel phones (of this year) will receive guaranteed Android version updated up until October 2018 and security updates for at least three years from today, or at least 18 months from when the Google Store last sold the device, whichever is longer (you do the maths on that, it’s late and my head hurts whenever I do maths).

***UPDATE*** After seeing the new factory images that Google have released it seems that the update is for Verizon Pixel phones only. Where this leads to in the future will be interesting as Google and Verizon have always said that the software will be the same as all other Google Pixel phones (aside from the 3 bloatware apps)

Alongside the appearance of the Google Wallpaper app on the Play Store was the arrival of the Pixel Launcher. It seems at this stage this is available for limited devices (Pixels) as it is incompatible with all of my devices, including my Telstra Huawei Pixel XL (see this post here why I have a Huawei Pixel XL — or if you would like to install the Pixel Launcher on an incompatible device).

The Pixel Launcher brings several updates from the previous Google Now launcher including gestures, app suggestions and the availability of shortcuts from within apps to be placed on the homescreen. While I do not use it exclusively myself it is worth checking out in case it is something you may like.

“I’m Feeling Lucky” was a staple on the Google home page for a long time. Google have now ported this over to Google Assistant in the form of a fun general trivia quiz. Not only does Google Assistant ask you questions, respond to your answers but also has applause and buzzers. More than one player can play but it asks each player a question in turn, keeping score as it goes. While this is obviously a feature officially available to only the Pixel via Google Assistant, those who have found ways to install Google Assistant on their Nexus 6P or Nexus 5X, are able to also join in the fun. Check out the video below for a game played on my Telstra Huawei Pixel XL.

Prior to now you could have an unlocked bootloader but still be able to use Android Pay as long as your device wasn’t rooted at the time. Now Google have changed something on their side that no longer allows cards to be added when a device has an unlocked bootloader. This has been confirmed by many Reddit users but we are yet to hear anything from Google themselves. At this stage it appears to be affecting Nexus devices only and whether this ban will extend to non-Nexus devices or Pixels is unknown.  The error that appears tells the user:

Android pay can’t be used on this device… Google isnt able to confirm that your device or the software on it is is Android compatible. You may need to unroot your device

This was from a user that did NOT have their device rooted but the bootloader was unlocked.  What happens from here we don’t know but with Google now focusing their attention on the mainstream with their Pixels it is unlikely to improve.  I have no doubt that someone at XDA will eventually figure out a way around it. 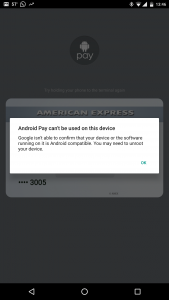 There you have it — a big day in Pixel-land.  We have also heard via out Google+ community that some of our readers are seeing their Google Store orders turning to completed and hopefully winging their way to their new homes in Australia very soon.  Keep us updated on the status of your Pixel.  You show us yours we’ll show you ours.

Stay tuned to Ausdroid for not just the latest Pixel news but all the Google and Android related news around the globe.

Picked up my Pixel yesterday from JB. Very snappy and I actually don’t mind the aesthetics (wasn’t the greatest fan from the renders but in person it seems better… maybe it’s just growing on me). Biggest gripe was the nano SIM, which I didn’t have, and had to go get one from Optus this morning. Coming from the Note 4, my SMS didn’t back up either so I’m transferring them over now.

So far, so good. It’s early days though so I’m sure some of the frustrations haven’t shown themselves yet.

People have the Pixel launcher working on the Nexus 5.

My guess is that before Christmas we’ll have most of the 7.1 Nougat running on the Nexus devices – as google could have done if they hadn’t completed their journey to the dark side.

Loving my XL, picked it up at the Telstra store without any dramas. Slick and smooth and the camera is amazing!

i’m using a work Pixel (not XL) and it is very smooth. My biggest gripe is the finger print sensor on the back when the phone is docked or charging, it’s a pain in the butt. double tap to wake would have been a no brainer feature for these phones.

Yup, double tap to wake should have been standard. Coming from an S7 edge I will miss the ability to wake the phone

Or just see notifications with always on display.
I read they are currently building double le tap into the next kernel update. Here’s hoping!

This is my biggest sticking point, listen to music for hours at work every day, not having an easy wake up function is holding me back. The device is nice in hand though so im still not sure which way to roll