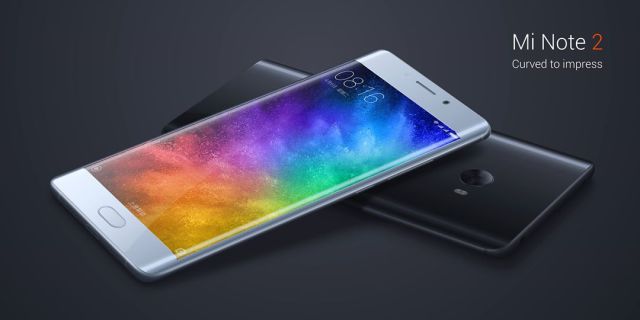 The other day I reported on the leaked specs for the Xiaomi Mi Note 2 (not to be confused with the Redmi Note 2, also manufactured by Xiaomi) and here at Ausdroid we were all impressed with the specs. Today the Mi Note 2 was launched and it seems that nearly all of these leaked specs were spot on.

In the past, Xiaomi have often released devices that had amazing specs but rarely, if ever, supported international LTE bands. Now it seems that Xiaomi are spreading their wings with the release of a global version of the Mi Note 2. The global version has the same high end specs that the best Chinese version does. The display is a 5.7-inch 1920 x 1080p flexible OLED display with curved edges which is a surprise as the leaked specs showed it having a 2K display. With the display being pushed by a Qualcomm Snapdragon 821 and an Adreno 530 GPU it promises to be a very speedy device.

There is 128GB of storage space along with 6GB of RAM and while the battery is not quite the rumoured 4100mAh but is a decent-sized 4070mAh. The battery can be charged using Qualcomm’s Quick Charge 3.0 The rear shooter is a 22.56 mega-pixel Sony IMX318 rear camera, with f/2.0, and like the Google Pixels, has EIS but no OIS. The dimensions of the phone are 156.2 x 77.3 x 7.6 mm (slightly larger than a Google Pixel XL but remember the display is larger) and weighs just 166 grams.

The most important piece of the puzzle is the LTE bands it will support. It will support a massive number of LTE bands, of which all Australian LTE bands are included within:

With the global version of the Mi Note 2 promising to be a great device, running MIUI 8 it’s pricing is as impressive as the rest of it. The global version is priced at 3499 yuan (~$730AU). There is no word on whether the Play Store will be included on the global version but my Chinese-phone expert friend tells me that not only is there an easy single click to install Play Store app but that Xiaomi releases source code easily and there is a LOT of support for them in the custom ROM community with there being a large number of good AOSP ROMs available.

With Xiaomi releasing an official global version we hope that there will be a relatively easy and official pathway for Australians to purchase the device. We have also reached out to a few grey market importers to see if they will be stocking it and will let you know as soon as we do.

Is this a device for you? Could this replace the Samsung Note 7 in the community?

Sadly my shaky hands mean I need OIS. Seems pricey for a Chinese phone that won’t probably be supported properly in Australia.

I bought a zenfone 3 deluxe to replace the note 7 myself, and I love it. I might consider buying this as well. It’s currently available for pre order at both geek buying and oppomart (can we post URLs here) but only the 128GB/6GB version is available in an international version so be careful of that.

The Indian version ( which run international ROM) of all Xiaomi phones have PLay store installed on them by default. So the global version will definitely have it

That is a LOT of phone for the money. Wow.

I think you mean Snapdragon 821 not 831, if not that’s impressive that they got the chip a year early.

yep. you spotted our deliberate mistake to see if you were paying attention 😀