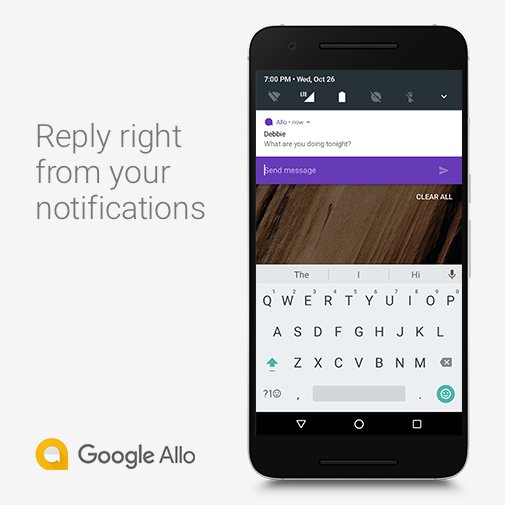 Google has announced on Twitter overnight that it has released a couple of updates for its Allo messenger app, including the ability to quick-reply from the notification (as shown above), and chatting in split-screen using the new multi-tasking feature found in Android Nougat.

While there isn’t a lot of info on either of these at the moment — they’re not enabled in Allo on my device just yet — the two features seem fairly sensible and intuitive. The ability to quick-reply from notifications has been around in other apps for a little while now, including Google’s own SMS app Messenger, and Ausdroid’s messenger of choice, Telegram. Basically, as you can see in the demo screenshot above, you tap the ‘Reply’ button in your Allo notification, and you can type right into it. The reply will then be sent to your recipient without even having to open the app.

Of course, by replying in this manner, you lose some of Allo’s cool features, like the ability to change the font-size of your reply, or send stickers etc, but you can still send emoji using a compatible keyboard.

The ability to use Allo in a split-screen environment will be far more useful on a larger phone (e.g. the Pixel XL) or on a tablet, but it makes the offering just that little bit more appealing.

Keep an eye on the Play Store for an update to Allo to enable these new features.

I was just thinking about this… How didn’t this functionality make it into launch? Very strange.

Allo for me is a weird outing for Google. It’s a nice product and Google Assistant is cool, though they are so “late” coming to the table that to compete with Whatsapp et al they needed to bring something extra to the table. For me, in essence, they needed to bring an “iMessage” equivalent to android and while Allo is all fine, the hurdle like with a lot of niche google products is my circle of friends using it or lack thereof. I assume I or we (tech crowd) are not the target market but it seems that the average… Read more »

“they needed to bring an “iMessage” equivalent to android”

Still useless features. Who cares about those? We need sms and conversation history migration. Google, do you know priority?

Still Hopeful of SMS… sick of having 3-4 messaging services

Yup, sms integration is the big thing. I stopped using Hangouts as my main app when they removed SMS support.

Google removed the ability to display SMS and IM messages from the same person in a single conversation, but SMS support is still there.

Yeah its pointless having 2 threads from the same person – one for hangouts, one for sms. Which is why I stopped using Hangouts when they did that.

What did you change to, if you don’t mind me asking? As far as I can tell, it seems like nothing on Android comes close to matching the complete functionality of iMessage?

SMS – stock google messenger app
IM – whatsapp, fb messenger and now recently Allo (to only 3 contacts who use it)

Cool, thanks. Looks like I’ll stick to Hangouts for SMS, Facebook Messenger for whoever uses that, and not install or start using anything else.

Allo looks OK from a functionality perspective, but if you have to convince people to install another app in order to use it, I suspect it’s largely doomed to fail. Unless it has some absolutely killer feature that no one else offers.

For FB messenger, how many threads if you talk to the same person using both sms and FB chat?