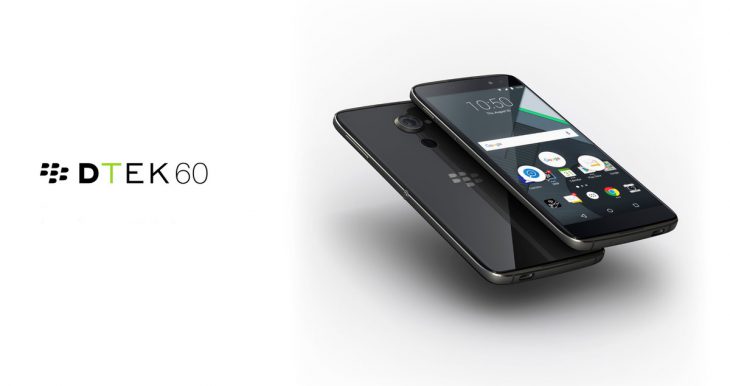 BlackBerry has officially announced the DTEK60, the second device in the DTEK series of Android smartphones and provides users, businesses and organisations with full access to the Android ecosystem. The DTEK60 comes with all the security features that BlackBerry’s Android OS devices have, including best-in-class security patching and the DTEK by BlackBerry app, which basically helps provide real time information regarding their privacy whilst surfing right from their phone.

DTEK60 is also part of BlackBerry’s transition towards a device software licensing strategy to focus more on providing the best and most secure software while the hardware is produced by a third party manufacturer. In the case of the DTEK60, this is TCL or as its main brand is known as, Alcatel.

With the DTEK60, BlackBerry continues to focus on our strengths: state-of-the-art software and security solutions. When you see our logo it means security, from our class-leading enterprise software to devices secured by BlackBerry software.

So here is what we know the DTEK60 has under its hood spec wise:

Starting today, DTEK60 is available to buy from ShopBlackBerry.com in the US, Canada, UK, France, Germany, Spain, Italy and The Netherlands for USD$499 (approximately AUD$652.76). BlackBerry have stated that the DTEK60 will be coming to other regions and countries with an announcements in the coming weeks confirming hopefully a timetable for when the DTEK60 will be coming to Australia.

What do you think of the latest and newest member of the BlackBerry DTEK family? Would you consider buying one? Let us know in the comments below.

looks pretty nice. are they going to load it up with weird blackberry software though?

BlackBerry’s software is the best. It has a universal inbox/hubb that integrates about a dozen messaging, texting, call log, social media, multiple email accounts into one (complete with custom views and widgets/shortcuts that provide access to those custom views). I has a brilliant short cut launcher that allows users to perform tasks within apps after only a single touch, it also has best in house keyboard, the productivity tab and the best security. Best all touch on the market. Hands down.

No mention of battery capacity or fingerprint scanner, but otherwise it seems to be great value. Interesting, for sure.

3000mah and a fingerprint scanner.