The Moto Mods are the bomb. Really.

The wise, and accurate, words of Dan Tyson, Ausdroider Extraordinaire.

Dan wrote this after attending Lenovo’s TechWorld event in San Francisco, and after using the Moto Mods for a week I have to say I agree with his take. The problem is that there isn’t many of them, and there is a big barrier to there becoming more, most notably cost. Now Lenovo, Motorola and Indiegogo are teaming up to help get more Moto Mods to the market. 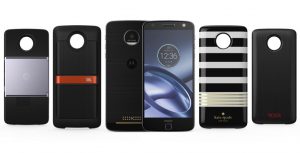 Currently there are several Moto Mods that include a high quality camera, stereo speakers, extended battery, and a movie projector. They attach to the back of the Mot Z and Moto Z Play using strong magnets that once attached feel as secure as if they were built as part of the phone. The phone does not need to be rebooted for them to work. They just do. You could imagine though that the cost of getting one of the Mods to market would be fairly high.

To help with this, Motorola are collaborating with Indiegogo to bring ideas “from concept to market”. Through Indiegogo, developers will have the opportunity to raise money for the production of their Moto Mod.

From now until the end of January there is also a Moto Mods Developer Contest where the developers will have a chance to win a Moto Z and the Moto Mods Development Kit. 10 finalists will receive a trip to Chicago to meet with the Moto Mods development team to discuss how to best bring their ideas to life. If the ideas hit the mark then the developer may receive an investment from Lenovo Capital who has set aside US$1 million for this purpose.

Alongside all this, Motorola will also be hosting Moto Mods Hackathons in the US to inspire developers to “bring their ideas to life”. Any Moto Mods created during the Hackathons can also participate in the Indiegogo campaign. More information on these hackathons can be found at the dedicated website set up for them.

To find more information on how to get started head over to Indiegogo and follow the steps outlined there. Even if the ideas don’t win funding from Lenovo Capital there is always the chance that enough funding will be crowdfunded via Indiegogo to bring the Moto Mod to market.

After using the Moto Z (review out in the next couple of days) I am extremely excited to see what this promotion brings. For Moto Mods to be successful I feel Motorola really need the developer community to get on board. Here’s hoping they do.

Got any suitable ideas? If you do head over to Indiegogo and get started!

I really hope there are more mods soon. Luckily I didn’t get an LG G5, because I’m pretty sure they promised ‘friends’ support would continue and built up that 3rd partys would be creating more. Well that idea died quickly. I’m concerned there isn’t enough hype around the moto z and that new mods won’t be available to the general public. I really hope so though, that would add a lot more life and enjoyment to this awesome phone