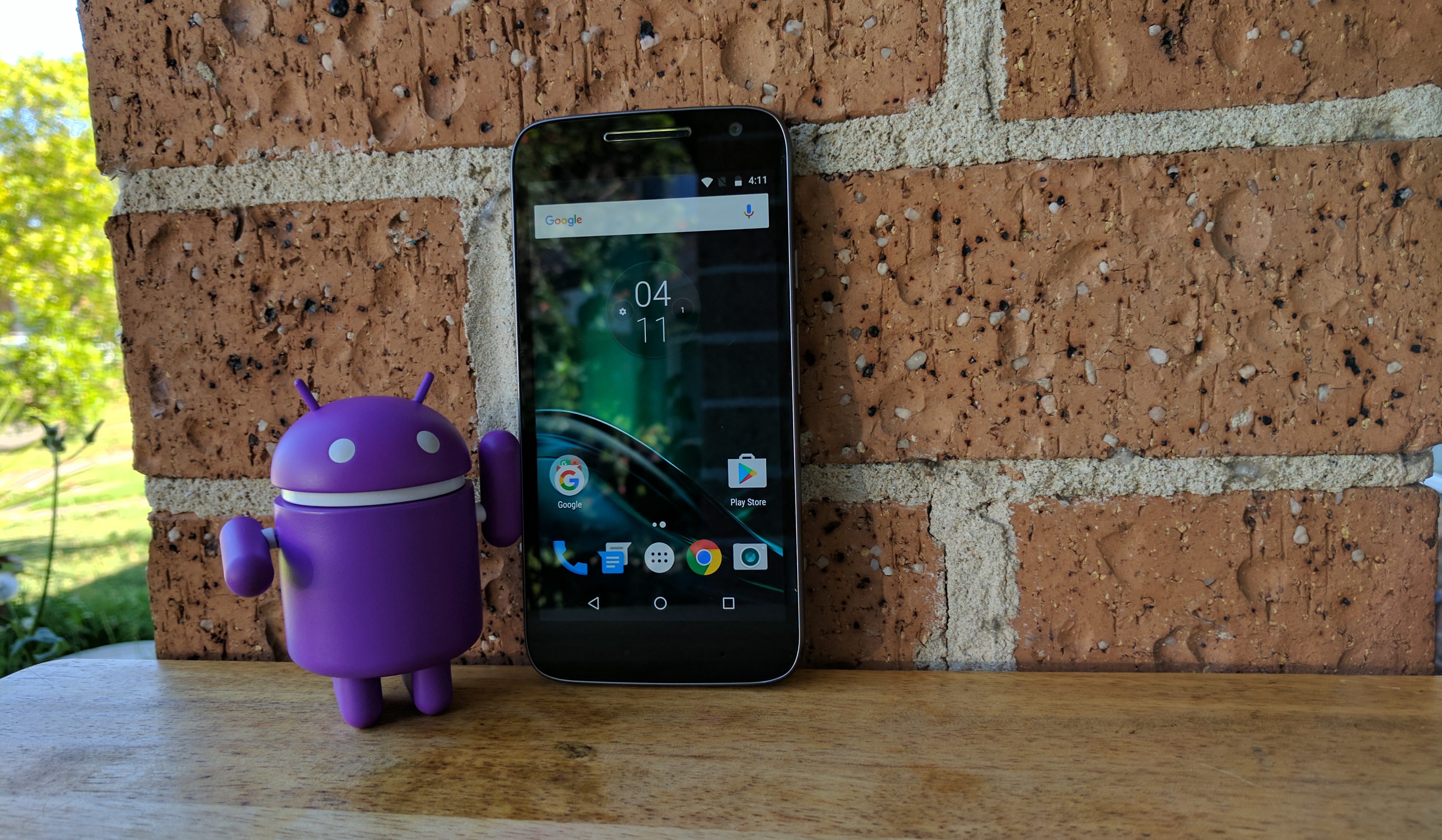 When Lenovo announced back in May that a 4th generation of Moto G devices was coming out in three different variants, I was a little excited to see how Lenovo could improve on its Moto G3 range last year which we reviewed and found to be a massive improvement over the previous generations of Moto G devices. Hands down.

As someone who has owned (and still owns) Motorola devices (the Motorola RAZR M and a Moto G2), I jumped at the chance to review the Moto G4 Play as I wanted to see how well it stacks up not only against the current a Moto devices that I have, but the Moto G4 Plus which Chris reviewed only a couple of months ago.

So has Lenovo come up with a cracker of a devices at a reasonable price? Can it hack the everyday usage of my daily life? Let’s have a look at what the Moto G4 Play can offer and do.

To be honest, I wasn’t sure what to make of the Moto G4 Play. It certainly does but also doesn’t look like a typical Moto device, given that normally front facing speakers tend to be the in thing for the Moto G family. However in this instance I would definitely say that the Moto G4 Play does take design cues from the first Moto G and infuses this with a more streamlined design for 2016.

When I say it takes design cues from the first Moto G, that would be around the main component other than the 5” all glass screen, with the Moto G4 Play being made completely from composite plastic material.

At the front of the Moto G4 Play, we can easily see the 5” IPS LCD Display which provides for 720 x 1280 viewing and certainly is easy on the eyes and not too shabby but I will go into that a little further down in the review. Whilst staying on the front of the device, at the top of the front screen we find the front facing speaker phone which is both used for calls and when you want to either play music, videos, movies or have a call placed on speaker phone mode. Again I will be going into this further down in the review.

Rear of the Moto G4 Play

The rear of the device does seem though to be a bit smoother and softer texture that doesn’t feel like hard plastic but more of a matte feel/consistency. The rear cover is an easy peel-off kind of cover and will assist in just getting your Nano-SIM and MicroSD card slotted right into the correct ports on either side.

On the middle at the top rear, just slightly below the top line of the device we find the 8MP rear camera with the typical white LED flashlight also placed just directly underneath. There’s the usual dimple with the Motorola bat wings brand found in the centre.

Turning over to the right hand side of the Moto G4 Play, we can see the power/standby button and just below that the volume rockers button which do stand out and seem to be made of the same material as the overall device, a plastic polymer. They have been made out to look like they are metal buttons but really in essence they aren’t.

Going to the top side of the Moto G4 Play, we see the 3.5mm audio jack which is located almost to the left hand top side of the phone. Talking about the audio jack, I should mention that the Moto G4 Play does come with the usual (and normally cheapish) headphones which I didn’t really use, opting instead to use my own. Usually with included headphones/earphones you tend to find they are quite crappy when trying to use them for anything, and Moto offers no exception.

Finally, flipping over the Moto G4 Play to the bottom of the device, you can find the MicroUSB Charger port which is located in the dead centre. This is where things become a little interesting as Lenovo have included a fast charger and cord into the box, meaning that Turbo Charge which has been a feature since the Moto X in 2013/14 is now available in the budget end of the Moto G4 family.

The Moto G4 Play comes with a rear 8MP camera which provides according to the Australian Motorola website a ƒ/2.2 aperture and I have to say I was actually quite impressed by it. When compared to say my old Galaxy Note 2 which had a similar megapixels, I could notice a difference and it was certainly a very positive one.

The one style I struggled with was taking a Panoramic photo, as I found the camera and the whole system slow down, meaning I couldn’t really take a decent Pano pic.

The 5MP front facing camera is also certainly a surprise to me and it can actually take a pretty damn good selfie if you ask me. The front facing camera though isn’t the best in low light – yes the display does act like a front LED light, but IPS LCD Display is no substitute Motorola/Lenovo. If you want to have a front LED Flash, then install one.

As you can see, when taking a selfie in low light it was more a scary and low light selfie then say to my Galaxy Note 5 or Oppo F1s which allows more light to flood through the front camera and doesn’t need really a flash display – just attach an LED floodlight which you can buy from Kmart or Typo or even the Ausdroid Store thanks to Gadgets4Geeks.com.au.

As usual with any Motorola device, the Moto G4 Play comes with stock standard Android 6.0.1 (Marshmallow) which is honestly what every Android manufacturer should do (or offer) with their devices. However Motorola have made some small tweaks which include making their own clock widget which kind of reminds me of the same clock,weather and battery info circles on my old Motorola RAZR M device.

It is unsure at this time if or when the Moto G4 Play will receive Android 7.0 (Nougat). I did reach out to Motorola to find out if they did have an official timetable for this to occur, and while the company announced last week that the G4 family will be getting updates, there was still no confirmation of an exact timeframe.

So performance wise, I’ll be honest, there is definitely room for improvement. The Moto G4 Play is running a Snapdragon 410 processor which is the same processor that the 3rd Moto G utilised, meaning it is a little this is one of the lowest-performing mid-tier Moto G from the 2016 lineup. This is also backed up in the benchmark tests which were undertaken for this review.

Web viewing was bordering on poor when surfing the net through Chrome, however when it came to playing certain games either that are cloud based such as The Simpsons Tapped Out or directly downloaded to the device like Monopoly, there were times where the device would stutter or strain to either play or view.

Flicking between apps was where stutter was often found. As with some other mid-tier Android devices, sometimes a reboot is what’s needed to clear out the cobwebs and bring back performance for a little while.

This is where the Moto G4 Play certainly has its strength, with battery life actually quite surprising me.

I found that when taking it off charge say at about 8 am to go into work or just out for the day, I found the battery really didn’t need charging when I generally would get home at about after 8 or 9 pm with about 40% battery life left. For me that’s with some mild if not close to heavy usage.

Unfortunately, the Moto G4 Play doesn’t come with NFC, which honestly is a major disappointment at a time where we, the consumer, are utilising NFC Payments either through Android Pay, Samsung Pay or any of the big 4 banks NFC payments. I do think this is something that Lenovo need to look into for any future device going forward.

WiFi wise, the Moto G4 Play comes with WiFi 802.11 b/g/n (2.4 GHz) which enabled a strong connection to my home WiFi and when out and using both the Telstra Air system and other public WiFi connections which were available at the time.

The Moto G4 Play doesn’t have the dual front facing speakers which is how the Moto G has usually been designed in the past. Instead, they have opted for one speaker at the front top of the device.

Whether this is a good move, I am unsure of. Having dual front speakers makes speakerphone easier to use, and also your music sound better if you are to listen to it out loud. That said, I guess one central speaker is enough, but it’s just not ideal.
Call quality was high, and it felt like it might even have been HD quality, but I can’t find anything in the documentation to suggest the Moto G4 Play actually supports this.

So what do I think of the Moto G4 Play? There is only one way to really sum it all up – it’s a fairly decent budget phone with flaws and it’s those flaws which can possible make the phone more of a comparison tool than anything else.

Would I consider purchasing this phone – most likely not but I would use it as a comparison device when looking at what other devices are out there.

I do believe the Moto G4 Play really is more of a successor to the Moto E, given Lenovo has decided to dump the most budget line altogether. While I can understand Lenovo wanting to fill the entry-level void that scrapping the Moto E created, diluting the Moto G brand — which was known as a strong mid-level performer — with something like the Moto G4 Play doesn’t make good sense.

Honestly having more than one Moto G4 device might seem like a good idea on paper, but in practice, it isn’t and this is what Lenovo needs to think about for next years Moto G line up. I think the previous strategy of having a budget Moto E, then a mid-tier Moto G and then the high end Moto X (which is now the Moto Z) is the way to go forward. Maybe even look at possibly revisiting the RAZR brand again … but I digress.

The Moto G4 Play is a nice device that I wish I could love. Honestly I do really, really want to like and love it, but with so many flaws, it’s one I’m prepared to easily move along from and to the next device.

The Moto G4 Play is available from both the Motorola Australia website shop, Harvey Norman and The Good Guys for the RRP of $279.

I managed to get a UK version of the Moto G Play which DOES have NFC. I really don’t understand why Lenovo would not offer this feature in the Australian market. I can totally recommend this phone. Battery life is great and it has a removable battery. Paired with the stock android experience, this really is the best budget android phone on the market.

Who else is reading this post from a Moto g4 plus already??