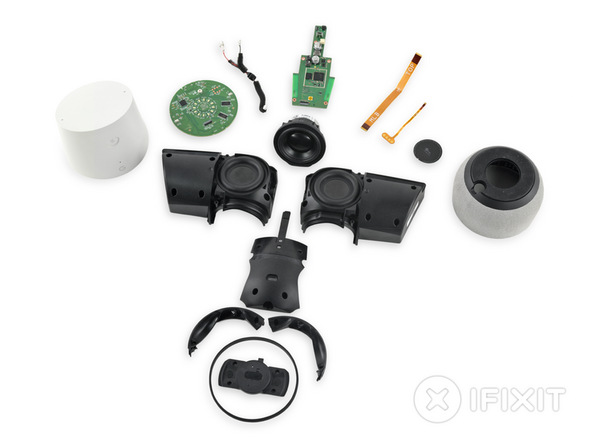 Getting the full iFixit teardown treatment is a rite of passage for many tech gadgets, and today the Google Home has received its own. So what’s inside? Basically, a Chromecast paired to some speakers, a far-field microphone and a touch panel, so … exactly what we were expecting.

It should be of little surprise to anyone that the Google Home is basically an amped up Chromecast, with the majority of the heavy lifting being completed in the cloud.

From a repairability standpoint, iFixit rated the Google Home an 8/10, which is a pretty decent score. The device was mostly easy to take apart, with the exception of how the capacitive panel was attached to the plastic housing, and the majority of the parts are modular and easily replaceable. The home lost points for the charging port being soldered to the main board and the previously mentioned capacitive panel.

Hopefully, a device like this that should be set up and left in the one place for long periods won’t need repairing, however if yours does suffer a mishap it’s nice to know it’s going to be an easy fix.

With reports of Google Homes making their way to Australian shores via grey imports are you considering getting one? Let us know below.

> With reports of Google Homes making their way to Australian shores
via grey imports are you considering getting one? Let us know below.

Well, with the Google Home costing US$129 and the Echo Dot costing US$50, I think a grey import of the Amazon effort might be a better bet. Particularly since there is rumour of Amazon setting up shop here next year, and different units would not then give you the chorus of “pings” that you currently get from phones/tablets when saying “OK Google”.

That gives you the scope to use better speakers too.