When Android 7.0 Nougat was released to the world there were a few items from Android that weren’t quite ready and as such were left out. One of these was the Night Mode, which was present in the Android N dev previews.

On Android 7.1 and higher, this feature is officially built into the operating system, called Night Light. However, this feature requires a driver, and as a result, is only available on Pixel and Pixel XL. As a result this will not work on Nexus devices on that version. While there are many apps that do this sort of thing on the Play Store, many of them don’t work with Android 7.1, and lets be honest, most of us would prefer to have it baked into the ROM as it was.

After Google removed Night Mode from Nougat for the Nexus devices an issue was started over at the Android bug tracker called Bring back Night Mode. After nearly 1000 starrings it seems that Google have, I won’t say relented as they may have planned on bringing it back in when ready, revealed that it will be in a future release. The status of the thread was changed to “FutureRelease” by a Google which is good news for many people. 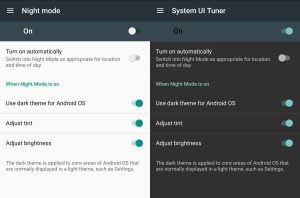 I must say that I am yet to use Night Light on my Pixel XL but having the option there is handy as I know I have used it on other devices in the past. If you simply cannot wait that long head on over to the Play Store and check out some Night Mode enabling apps.

Some simply enable the toggle/tile within SystemUI Tuner and only works on Android 7.0 and others it does that for version 7.0 but uses an overlay for Android 7.1 which has some security implications in that you have to allow that app to do this.

The options are there for you- wait for Google who do now intend to implement this in future Nexus releases, or head over to the Play Store and use an app to do the same thing.

I always use it after sunset. Don’t ever notice it’s even on now but if I turn it off it’s painful.

Glad to see it coming back. This was a highly used feature for me. Under rated feature I might add.