Back in mid-late October I reported on the progress of root access and a custom recovery for the Google Pixel phones. We have since seen root access arrive for them but due to the complexity of the new File Based Encryption the Pixels use the development of the recovery has been very difficult. We have seen a few teasers along the way and today the team over it TeamWin have released what can only be described as a very alpha build of TWRP.

TWRP is a custom recovery that allows users to backup their entire phone, flash custom kernels and ROMs and other modifications. It is basically an essential modding tool so the community have been waiting patiently for it to arrive. Over at XDA lead developer of TWRP, Dees Troy (Ethan Yonker), has posted a thread with links to the new TWRP for the Pixels.

In big red letters, at the start of the thread is the warning:

Note: Do not use this if you are waiting on an important phone call. Do not use if you have critical data that you cannot lose. Use Google Photos backup, etc! You have been warned!

This in itself should scare off even the most adventurous modders. It certainly has me, for now. Of note, and the reason I am NOT going to use it yet, is that it breaks the way root access is obtained on the phone so at the moment you cannot have both, it is either root access OR TWRP. TWRP on the Pixels is also prone to wiping your entire phone randomly, another reason to wait and watch on this one.

Another note, and for future awesomeness, is the fact that TWRP can decide which of the 2 “slots” to use and boot into. Google use the second slot for seamless updates but if you are running a custom ROM etc then updates from Google are useless to you. Changing the boot slot in TWRP tells the bootloader which slot to boot into. Instead you MAY be able to dual boot different ROMs and setups — eg. one non-rooted ROM for Android Pay etc and one for everyday fun.

If you would like to install it, and I DO NOT recommend you do that, you will need to download the zip file and the img file. You will then need to, from the bootloader:
fastboot boot path/to/twrp.img

Make sure that you type boot and NOT flash here. This will boot you into a temporary recovery where you will have to enter your password/pin if you are using one on your device. Once into TWRP proper you will then need to flash the TWRP.zip file you downloaded. This will install TWRP to BOTH boot slots and also remove root in the process (assuming you had it in the first place). A SuperSU update from Chainfire will be required for them to function symbiotically going forward. I would expect to see this within the next week. 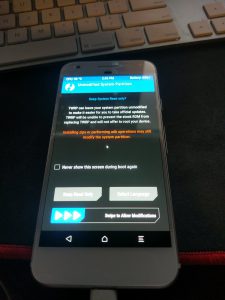 If you are interested in testing this out, or even just interested in reading more about it head over to XDA for the relevant threads. The Pixel TWRP first post is identical to that for the Pixel XL TWRP but the recoveries are NOT. You have been warned. Let us know in the comments below if you intend to jump in and try the alpha version of TWRP on your Pixel phone.

**UPDATE** For those attempting this it seems a good idea to return to a full stock factory image before attempting it. Users have been much more successful using this method.