Yesterday afternoon TRWP was released for the Pixel phones, albeit in an alpha form. Unfortunately the alpha version broke root access and as such was fairly useless as there is nothing to flash with it at the moment. This morning Chainfire has released an update to his root method to function fully alongside an installed TWRP.

Not only do the Pixel phones use a dual partition system but the normal Android boot and the recovery share a boot image now. This is different to the past and means that changing one will result in issues with the other. This is why the alpha TWRP broke the first version of root and why the updated version today fixes it. Not surprisingly Chainfire and Dees Troy (TWRP lead developer) do talk to each other so this breaking of root was expected and thus the fix is here already.

Aside from some optimisation of the process there are also various fixes to the installer script to allow it to work seamlessly with TWRP but even then some issues can occur so it is imperative that anyone read the instructions carefully before proceeding with any of this. 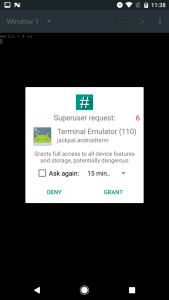 To obtain root alongside TWRP you will first need to reflash the stock boot image (grab it from the factory image), then install TWRP as per the instructions in that thread and then flash the new SuperSU inside TWRP after rebooting from the temporary TWRP into the new permanent TWRP. More information can be found at Chainfire’s Google+ post and if you are looking to go down this path I highly recommend you read that carefully along with the TWRP threads over at XDA.

As always please backup everything you have on your phone before proceeding with any mod and read as much as you can. Proceed at your own risk as always but remember that if you do run into trouble we will try and help you fix it as much as we can but take no responsibility for what you do to your phone. Right, I’m off to backup my phone, time to get cracking on the modding.