2016 has been yet another dismal year for HTC’s own devices. The HTC 10, while a fairly decent phone, has been a sales flop. The Taiwanese company has been unable to compete with Samsung and Apple (but who can). HTC can still make a great phone, as witnessed by the best Android phone money can buy, the Pixel phones from Google. Today a rumour has surfaced suggesting that HTC may be in the process of selling off the smartphone arm of its business.

Once again my new favourite Chinese social media site, Weibo, has produced a rumour from an insider at HTC who has stated that HTC has decided to sell the mobile phone business with an announcement coming in Spring of 2017 (Autumn our time). While HTC have “sternly denied” (quoted via Google Translate) the rumour, it was corroborated by a separate source who has said that there are four vendors interested in purchasing HTC’s smartphone arm. The rumour says that HTC are denying so strongly because the buyer and government of Taiwan are hoping to keep it low-key. In saying that, whenever a business is sold, it is rare to hear beforehand that they are up for sale.

We have been having strong discussion here at Ausdroid regarding this rumour with some of us expecting (and hoping) that Google might buy the HTC smartphone business. Unfortunately those who don’t expect this to be the case make a good point, in that Google just do not produce enough products to make this purchase profitable. Google seem to be expanding their hardware business, but seem to be doing well out-sourcing the manufacturing and would be unlikely to make more money manufacturing it themselves.

If that was the case, surely Apple would have done it by now? It will be interesting not only to see who, if anyone, purchases the smartphone section of HTC but also to see what becomes of what’s left of HTC. What is left if they sell of their smartphone business, assuming the sale includes the manufacturing as well? A sensible solution for HTC would be to sell off their name but keep the manufacturing side of the business, back to how they started out, as an OEM manufacturer.

What do you think? Is this rumour credible? How can you see it going down? 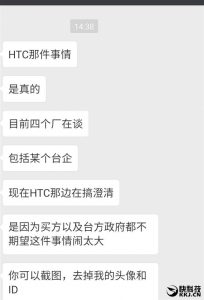 They make great phones but astetically they look like every other phone .they should have taken a leaf out of Xiaomi those high end new curved screen bezel free phones look stunning but alas design wise HTC fell way behind .

I always thought that Sony and HTC would be a good fit together.
I guess that is because whilst they are moderate sellers, they do know how to make a good phone for the most part.

If Google did buy them surely it would be for the same reason they bought Moto and that’s for the patents? HTC are the company of firsts so surely they would have a goldmine just sitting there.