Google has kind of heard the wants of its users, releasing an update to Android Pay to allow users to pay with any card in their wallet, instead of just the default. However, this is a little bit misleading; you could do this before, but it’s now been made just a little bit easier. Instead of having to assign a new default card, you can temporarily pay with an alternative card by simply opening Android Pay and dragging that card to the top. The next payment, then, will come from that card. 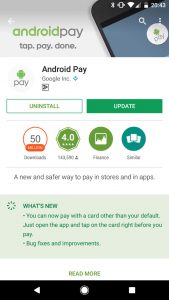 On my Android Pay, I only have the one card set up, so I’m not able to fully test this, and besides the brief update notes in the Play Store listing, this doesn’t seem to have been picked up elsewhere. We would assume that after making a payment with a non-default card that Android Pay will revert to your default for the next payment after that … but it’d be good to confirm this.

Have you got a couple of cards in your Android Pay? Let us know how the new feature works for you.

A widget for choosing the default card would be pretty handy…

as already stated, this is old news.
Selecting a not default card for payment was enable about 2 months ago

The only change I noticed is my card disappeared, and I had to add it again.

Also, it’s rather annoying that when an update is available, it disables itself until you do the update. A few times I’ve gone to use it, and it’s failed, just because they’re pushed an update.

How about I have 0 card compatible with Android pay.

As others have said, I think this is an old changelog – it’s been saying this for the last several updates IIRC. I know I’ve been able to use different cards by selecting them for a while.

You can also (although it doesn’t work reliably) use App Shortcuts to do it in Nougat.

I find the app shortcuts work really well – it’s the only app shortcut I use regularly (well, only when they don’t accept AMEX)

I find often that I’ll select a card from the app shortcut, and it’ll come up in the app using the wrong card – which is incredibly frustrating when you mean to select the Visa, it brings up the Amex anyway, and the retailer has to restart the EFT process because their machine doesn’t take Amex.

I haven’t had that problem, but I’ll definitely keep an eye out – seems like a bug

It may not still be an issue – I stopped using App Shortcuts because of it. I’ll do some more testing in the coming days and see if I still see it.

I have been able to change the order of cards before as well… so don’t really know what they updated.

The feature to select another card (other than default), by launching the app then selecting said card has been live for a while now. I can recall using my Visa (my default is AMEX) to pay for at least a month or since the Pixels came out. I believe that if you do not have the app in the foreground or open, it will default to the Default Card.