Home News and Editorial Chris: What’s in my bag? As Phil has noted, we’re often asked what kind of fun, interesting or unique gear we’re carrying with us on a daily basis. Some of us carry an awful lot, as Phil detailed in his post, and some of us carry a bit less.

My day job sees me working out in the field most of the time, so a bag with my essentials is absolutely necessary, because I don’t have a desk to work at most of the time. Well, I do, but I don’t want to.

So, let’s dive through my work bag, and see what’s inside.

Today, I’m carrying three phones with me, though only two of them actually function as phones. For my personal mobile, I’m carrying Google’s Pixel. It is without doubt one of the best phones I have used this year, and probably for quite some time before that. The battery lasts forever, the camera is great, and the software fast. Really, I can’t fault it.

My work phone is an HTC Desire 626. It’s not the newest, best, fastest, or anything-est, but it’s a phone and it works. Truth be told, about the only thing it gets used for is taking photos or making an occasional call. Otherwise it sits in my glovebox in the car — I don’t usually carry it around.

The third phone, if you can call it that, is a Motorola ES400. It runs Windows Mobile, it doesn’t have a SIM card in it, and it’s mostly pretty boring. However, it does have software on it that I have to use for work. It’s only in my bag some days; most of the time I leave it in the office and use it when I have to in order to issue notices etc.

Tablets and other larger items

Unlike Phil, I don’t routinely use a tablet. In fact, while I have a Pixel C at home, I can’t remember the last time I actually powered it up or used it. I just don’t have a use case for tablets. I don’t read comics, and if I’m watching movies, TV or the like, I’m watching it on the TV. I do, however, usually have my laptop in my bag, because you never know when you might need it. It’s my personal laptop, not issued by my day job, but I do occasionally use it for work (because it’s easier on a laptop than a mobile screen to access some things). My laptop is an Apple Macbook Pro 2013, with 256GB SSD and 8GB RAM. I spent quite a bit of money on this a few years ago, and it still serves its purpose admirably.

I have an Optus 4G hotspot (made by Huawei) which I bought for $49, with a 44GB prepaid data SIM on board that has a two year expiry. Optus has fairly good coverage where I work, and so this little guy goes everywhere I do when I’m in the field. Usually it sits on a microUSB charger in the car, so it’s always ready to go. My only complaint? It’s white plastic, so it gets dirty easily.

I don’t carry a portable battery around these days; I used to, but I find that most of my gear stays charged a full day without resorting to a portable battery. That said, I do have an assortment of cables in my bag which I can plug into the car to charge things if they get a bit low; one each of a USB-C cable, MicroUSB and MiniUSB do the trick.

I do carry two pairs of headphones, one Bluetooth and one wired. The Bluetooth set are the BlueAnt Pump Mini 2s which Duncan reviewed a little while ago; these are probably the best tiny wireless headphones I’ve used, but they don’t match the Bose QC35s for audio quality. For daily wear, though, they’re almost unbeatable.

The second pair are a Bose wired pair with sport earpieces, and they’re good for when the Bluetooth headphones go flat, or I might leave them plugged into my work phone in case I’m driving and need to answer it without pulling over. Usually they just sit in the bottom of my bag.

At this very moment, sadly, I don’t have a cool bag to keep all my gear in. It sits in my work bag while I’m in the car, and if I’m out of the car (e.g. in the office, overnight, at home, etc.) I take all the valuable gear out of the bag and take it inside. 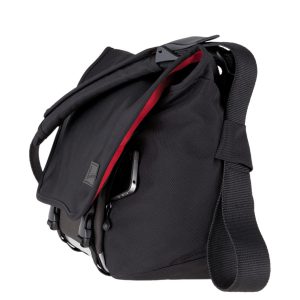 I do, however, need to get a new bag to carry my gear in. I’m thinking something from Crumpler, who have always made quality bags that look a bit unique too.