I am yet to come across someone that does not love the design of either of the Samsung Gear S3 smartwatches. Even with the success of the Gear S3, Samsung are not leaving the Gear S2 behind. Today they have released a large software update for the Gear S2 smartwatch that enables some Gear S3 functions.

The update is a whopping 133MB in size so I suggest you do it over Wi-Fi. You will also not be able to interact with your Gear S2 while it is proceeding. The download to the phone itself was relatively fast but the transfer over Bluetooth to the watch was painfully slow, so keep that in mind when you click the install button. To get the update I just manually checked for updates in the Gear app.

The update allows the user to download the Gear S3 watchfaces along with some Gear S3 apps/widgets, such as the Reminders app and the Alti-Barometer app. It also “enhances the function of its intuitive bezel” allowing users to answer or reject phone calls and other notifications using a twist of the bezel one way or the other. For those interested in attempting to write on a tiny watchface, that feature is included in the update as well as some advanced activities within the S Health app. There is more support for third party widgets and an improved weather widget. There is also some access to games on the Galaxy App store. 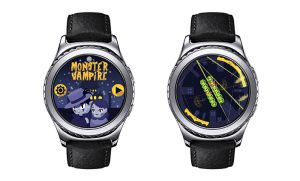 The update has added even more functions to a smartwatch that seems to be over-cluttered with so many functions, but if you happen to have a Gear S2 I recommend you install this update asap. The Gear S3 watchfaces alone make it worth the price.

Hoping that we may see some deals on refurbished s2 here soon, great sales in the U.S…

Do you know how to tell if this latest update has been applied?

Thanks. I bought an S2 just one week ago so I’ll install this update.