Last week Niantic and the Pokémon company announced that more creatures were coming to Pokémon Go and we would find out on December 12. Today is December 12, somewhere. New Pokémon are scheduled to start appearing today.

What this means for those of you who are out to catch them all is you best get moving. There are “large quantities of special edition Picachu” which have been themed to bring forward the Christmas spirit. What’s more likely to get the Pokémon Go players fired up is the chance to catch a Togepi or Pichu as well as other select Pokémon which originally appeared in the Pokémon Gold and Pokémon Silver video games. Niantic, Inc have not specified which Pokémon will be appearing aside from these two but the rest of them will be appearing between now and December 29. 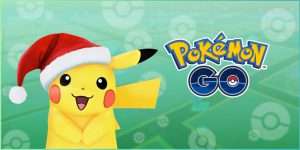 All in all it looks like an interesting seasonal addition to Pokémon Go, use your Christmas holidays constructively and get out and catch them all.