Telstra are very particular about their network. Maybe that’s why they do have the best network around but unfortunately it means that Telstra users often receive updates later than others. So far it seems that no one in Australia, using a Telstra SIM in a Google Pixel phone has received the latest update to Android version 7.1.1.

Telstra have been caught blocking updates to Nexus phones before whether Telstra sold the phones or not. The explanation is always that they are testing it to ensure their customers receive the best experience on their network as possible. When Google announced that Telstra would be the official carrier partner in Australia for their new Pixel phones Google advised us that “the Pixel phones on Telstra will be getting updates at the same time as the phones purchased from the Google Store” although Telstra’s Director of Devices Andrew Volard said that”

At the time we were unsure what this meant but now we know. Pixel phones purchased from Telstra will NOT be receiving updates at the same time as all other Pixel phones. They will receive them when Telstra say they can and not a moment before.

Fortunately, just as there was in the past, there is a very simple workaround. Remove your Telstra SIM and connect to the web using your wifi. A reader removed his Telstra SIM, inserted an old Optus SIM (which did NOT have any signal as it had no credit) and connected to the net using his Vodafone Wi-Fi hotspot and viola, OTA update for 7.1.1 arrived.

The other way to get the update is to sideload it yourself or to flash the full update, both available from Google’s repositories. 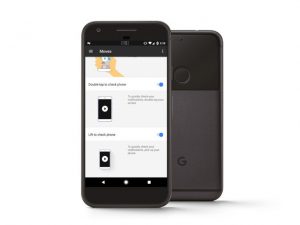 For me I certainly would not be waiting for Telstra to give this update the thumbs up. I have been running it on Telstra since the day it was released on without a single hiccup. Go and grab it yourself or just take your SIM out and experience the new goodies Google has cooked up for you.

Can confirm Pixel devices on Telstra are now getting 7.1.1.

Yep, literally just got my notification for a system update.

If Telstra are only going to delay updates by a week or two, and use the time to ensure everything is working correctly, then I am happy to accept this. The wait hasn’t been that bad… But it HAS to stay like this.

Overnight my Nexus 5X which is on Telstra suddenly got 7.1.1 at last. Reckon Ausdroid scared ’em. Good work guys!

It should be illegal for telstra to block the updates to unlocked phones.
Do they block is updates, no

Gave this a go last night. Popped my Telstra SIM out and no update, even through 3 reboots.

Popped a Vodafone SIM in and got the update straight away.

So I bought a Pixel outright to use on Telstra… And Telstra is still able to block the latest update? Please say this isn’t so because I’ve still not received the update either.

only if you have a telstra sim in it

That’s a joke! The only reason I bought the Pixel outright was to avoid this Telstra bs!! Now, even with my Pixel that I 100% own, I have to circumvent Telstra with hackery nonsense.

Technically it is Google blocking the update to pixels with Telstra sims, not Telstra. So Google is also to be blamed.

yeah – we really thought Google was going to play this more like Apple and force providers to update on time.

Thanks for this. I was wondering why I hadn’t received the update yet. Thought I was free from Telstra restrictions since the phone had no Telstra bloatware installed.

When are Google going to wake up and put the necessary infrastructure in place to avoid carriers being able to block their software?!

Apple do it and its one of the many reasons I use an iPhone….it just works!

Carriers test iOS updates as well. Apple are just better at organising it.

Google seem to have announced the 7.1.1 update despite not getting approval from carriers.

To be fair, the Pixel just works, and still just works without 7.1.1 mate.

Fair call mate….I’m probably more talking about the overall way that Android is completely fragmented based on handset and carrier which is why situations like this 7.1.1 update occur…..iPhonesiPads aren’t as it’s a centralised Global update service.

Again, I just don’t understand why Google with all their resources can’t sort this out given it’s such a negative for the product?

Well thats the thing, it’s not such a negative on their product. They only now have a product called the Pixel. Having delayed the update by a week isn’t that bad really. And it’s Telstra’s choice, not Googles. Given that Telstra users in Australia barely count for a fraction of a percent of sales of Pixel phones, I doubt they really care. As far as fragmentation, you can blame manufacturers like HTC, Samsung, Sony etc etc. Apple has gone through much worse, I remember when they didn’t even allow copy/paste for a year after android already had it, and there’s… Read more »

Can confirm – wife and I both have Pixels from Telstra and neither of us received the 7.1.1 OTA. We bought an Optus SIM, used in both phones and both got 7.1.1 instantly.

I thought Telstra had sorted this when lollipop was released?

I am on Boost Prepaid (telstra network) I am on 7.1.1 beta and waiting for final 7.1.1 forever. I may borrow my Dad’s kogan sim n try. Thanks didnt know it can even block MVNO’s update. My Nexus 6p is outright from Optus.

Won’t work even with a new sim as the release build is, for some reason, older than the DP2 build.

Google released Pixel to wow iPhone users is what Hiroshi Lockheimer said the other day. He should see this over, too. Not a good first impression here.

My partners Nexus 5X is still running 6.x. Have Telstra said anything about blocking 7.x on that phone? It’s rather annoying.

My Telstra 5x stayed on 6.0.0 when left to check for updates automatically. A couple of weeks ago I went in and manually hit check for updates and 7.0.0 was available. It had Auto checked earlier that morning and found no updates. Considering I’ve only ever manually checked about three times since getting the 5x over a year ago, what are the odds?

Pretty disappointing to be honest. Bought a Pixel XL from Telstra day 1: 1. Didn’t get Daydream VR because I bought it on a plan before the deal was offered -> not offered the Daydream when I contacted them (not too big a deal as it is a promotion afterall). 2. Now waiting for 7.1.1 to be released from Telstra despite it being publicly available through other means. One of the reasons I got the Pixel was because I thought I was going to get updates right away as soon as they’re released. But this feels no different from being… Read more »

The thing is, Apple dont really get it right. They may force the carriers to sit out the testing, but working for Telstra i have seen hundreds of iPhones bricked, lose data, or simply not work after receiving OTA updates. We actually receive employee comms everytime there is an Apple update coming up as we know we’re going to get a lot of complaints of phones not working etc. Apple like to publicise that all their users receive software updates at the same time, however they wont acknowledge the hundreds of thousands who have issues everytime they do an update… Read more »

Your problem was telstra, not pixel.

My Nexus 6P was getting the 7.1.1 beta updates fine but as soon as the full version was released my phone stopped seeing any updates. Sigh Telstra

That’s not Telstra, the released 7.1.1 is a newer build than the latest beta. Sideloading will fail also because of this.

*the latest beta is a newer build than the released 7.1.1

You would have thought by now they would have realised that such behaviour was not acceptable, and wasn’t going to work anyway. Everyone knows how to get around this particular stupidity by now, and if the update doesn’t work on their network, but works on everything else, then THEY are at fault. Stop with this ‘testing’ lark, let the updates flow through, and if your network falls over, then fix YOUR network (which might be no bad idea for Telstra anyway). Oh, and next time google, maybe don’t give an exclusive to the network that likes to say “NEIN, ze… Read more »

I was skeptical of the telstra updates to the pixel after seeing how updates to the 5x had been going for a lot of people … but i had high hopes that Google might have structured or contracted it differently.
But alas it seems it will continue.
History has shown its never any different for nexus products.

Its almost comical when you can use a different sim or side load the software and have the same software that telstra is holding back.

This is quite simply why I refuse to by a phone from Telstra – especially a Google phone (Pixel etc).

After sideloading the 7.1.1 OTA on my Nexus 5X, I got an update to the Phone app with a new round icon. Haven’t found anything else outside of that though.

Perhaps not automatically, but you can definitely sideload it yourself.

Not at all. I recently did it to my Nexus 5X. Google: “how to sideload an OTA.”

It is when there is no official version of Nougat for the device in question. You’ll need to find a custom ROM to enjoy 7.x on your Nexus 7.

Google’s OTA page says that 6.0.1 is the last Androiid version available. You should have the December security patches at least.

Taking the SIM out won’t do it; you need to put in some other SIM. Doesn’t matter what it is – Optus, Vodafone, that old SIM you got from a trip to the UK, just anything but Telstra. Do that, reboot it, connect to WiFi and the OTA will be there waiting for you.

Aaargh. Gotcha, will try with partner’s SIM when she gets home.

I just put an old dead Dodo sim in mine and checked for an update and nothing there, hit home defeated, and it notified me that I have an OTA update, hahah, installing 7.1.1 now on a Pixel XL bought via Star21 (Telstra re-seller)

I’m surprised they can block an update based on your sim card… Is it definitely the sim card or the fact it was bought from Telstra?

Mine was bought from JB outright with Telstra sim only plan and they blocked me. As soon as I put the Optus Sim in and connected to Vodafone my OTA was available. Telstra will probably deny it but the evidence is there. I wanted to go into a Store and talk to them about it but I’d probably just be wasting my time.

Hey Chris, is Ausdroid going to ask Telstra for an official response?

Is it really worth it though? It’ll just be some canned PR-friendly response with no real substance.

I’d just like to see what kind of bulls*#t reason they give or whether they deny it, that’s all.