Home Mobiles Rumour: Samsung Galaxy S8 To Feature Fingerprint Sensor On The Back

We have heard many rumours about the Samsung Galaxy S8 and it has gotten me excited for the first time in, well, probably ever, to see what Samsung produce. Not because I want to buy one but because I think they will pull out all stops to bring something breathtaking and innovative to the market. With the Galaxy S8 rumoured to be without bezel the expectation was that Samsung would most likely include an under the glass fingerprint scanner such as the Qualcomm ultrasonic scanner or the Synaptics optical fingerprint sensor. A new report from Korea has refuted these rumours.

Korean publication Naver has reported that the fingerprint sensor will find its way to the rear of the device, most likely below the rumoured dual rear camera. They also mention the bezeless display and the lack of a home button, which was previously rumoured. Not finished there there is also mention that joining the fingerprint scanner in securing the Galaxy S8 will be an iris scanner, something that was a key feature of the ill-fated Galaxy Note 7. 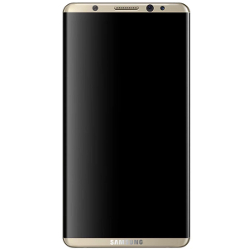 Maybe, and unfortunately for Samsung, the whole Galaxy Note 7 fiasco is what the industry needed to spark innovation. Samsung certainly have the ability to do it and do it they must if they are going to win back the hearts and minds of the general public.

Every single person boarding a plane in Australia is reminded of their last flagship over and over again. Samsung need to do something big to recover. What do you think it will be? Or will they just continue on with business as usual?

Will you consider the Galaxy S8 for your next?

Samsung has had to eat some serious humble pie over the Note 7 disaster , and that is really shame coming from a note owner , by the same token ,Samsung seemed to be riding a wave of success , and like all things in life at times we can become a bit blaze in our life exploits , and no doubt in manufacturing devices as well , especially when things are going well for an extended period. Sometimes we need to bugger something up and accept our lumps afterwards to remind us that our success can be easily taken… Read more »