Having used and still often use the pen with my Surface Pro 4 it seems like a wave of the future that Google are jumping onboard. The ability to quickly sketch or draw a note, to quickly write a phone number or note would be invaluable to many people.

To use it you just click on the pen icon in the “take a note” box at the top. Then you can write with your stylus/pen/finger/mouse as required. I tested it out on a Surface Pro using pen, finger and mouse and they all worked fine. After writing the test you can then go back and use the three dot menu to “Grab Image Text” and Google Keep’s OCR does the rest.

As you can see in the image below it recognised my scrawl perfectly from the header image. On my desktop PC the mouse worked as well, although I’m not sure when you would do this? Maybe to sketch a diagram? 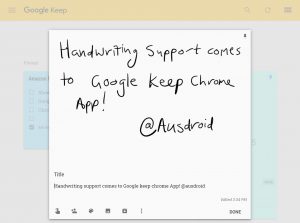 Handwriting is a great addition to Chrome which seems to be gearing up for a big evolutionary leap in the next few months. Now we just need some new devices to use it on — rumours are that the Chromebook Pro won’t be the only Chromebook released in the new year that has some form of pen/stylus included. Who wants a Samsung Chromebook Pro now?

Chrome for my desktop doesn’t have this option :c