There have been quite a few custom recoveries over the time but these days the majority of users will use TWRP custom recovery. There is a reason for this — it is stable (mostly), feature packed and the developers are extremely active and knowledgeable. Now they have released their first app to the Play Store.

While it is not the first app to be able to flash recoveries etc from within Android, it has some added functions that may be useful for most people out there. With root access the user can easily flash TWRP to their device, without having to go into recovery itself or fastboot mode. At this stage recoveries, must be flashed to the recovery partition. The flash boot option is for flashing full boot images such as a stock boot image (not just kernel zImages). Do not use the boot selection to flash recovery. The app will also check for updates to the recovery intermittently (once per day is default). Root access is not required to check for new versions of TWRP. 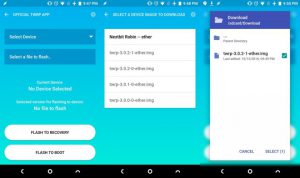 TeamWin have partnered with a company called P3 on the development of the app. In what may be controversial to some tinfoil hat people, the app can also be used “to monitor and record the network performance of your device”. They have attempted to head this off before ensuing FUD occurs:

P3’s InsightCore will keep track of signal strength, network type (3G, 4G), and network speeds. If you enable this feature within the app, you will be able to monitor how well your carrier’s network performs and compare the performance you are getting with your carrier to the performance of other users on your same carrier and compare to performance on other carriers in your region. We believe that crowd-sourcing this network performance data and providing that data to users will help you better choose which carrier offers the best value.

It seems like a good idea. We are always saying that Telstra have the best network, wouldn’t you like to see some independent stats that actually prove it one way or another?

At this stage, the app does NOT support the Pixel phones due to dual partition layout they have. It also currently does not support flashing images from an external storage location, but this is the first version of the app and it is in continuous development, just as their recovery is.

Anyone interested in this is it’s current iteration or do we chalk it up as one to keep an eye on as development continues?