The time of the 2-in-1 laptop computer is here. Lenovo’s Yogabooks are very popular, the Surface Pro and Surfacebook are amazing devices and today we saw Samsung announce their 2-in-1 Chromebooks. Dell have had their 2-in-1 laptops for a while now but have now stepped up their game introducing a 2-in-1 version of the lauded XPS 13 laptop at CES 2017.

The new Dell XPS 13 2-in-1 will be a very similar build to the standard XPS 13 laptop, utilising the same display and build materials. The difference is that the hinge is now 360 degree rotatable allowing you to use the laptop as a clamshell laptop or a tablet. The display comes in a FHD resolution (1920×1080) in the lower two models but the top two models have the QHD+ resolution (3200×1800) displays. Both displays have the popular InfinityEdge touch display that the XPS 13 is famous for. All the displays are touch sensitive and work with their optional Dell Active Pen, with thousands of levels of pressure sensitivity at pro-level precision (2048).

The 2-in-1 devices are powered by either a 7th generation Intel i5-7Y54 or i7-7Y75 Kaby Lake processor. The RAM ranges from 4GB to 16GB and the SSD storage ranges from 128GB to 512GB. Running Windows 10 it promises to be a much more productivity focussed device than the Chromebooks from Samsung (personal opinion). The kicker is the price of course. The bottom end i5, 4GB RAM, 128GB SSD with FHD display will set you back US$999 which isn’t too bad but at the other end, the i7 version with 16GB of RAM, 512GB SSD and QHD+ display will set you back US$1799. All prices are garnered from the Dell USA website but we expect it to show upon the Australian website shortly. 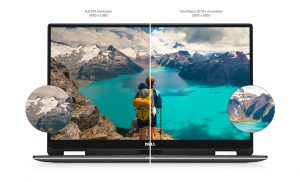 2-in-1’s could well be the wave of the future, but they certainly are the wave of here and now. Everyone is making one and Dell have just made what appears to be a really good one building on their XPS 13 legacy. If you are in the market for a 2-in-1, or even just a standard laptop this is one we highly recommend checking out. We are hoping to get our hands on a review unit soon so keep an eye out for that.

US model with i5 8GB Ram 256HD for $1199USD = $1633AUS how the hell are they going to sell this at $2299AUS, $666 difference after conversion. This is what I hate about these companies who hike up the cost for Australia, pure highway robbery pricing.

Can we all please make a pact to stop referring to these types of devices as tablets”? Tablets don’t have keyboards permanently attached. If they have a keyboard it has to be totally detachable to be in “tablet” mode. If the keyboard is permanently attached it can be called a “clam shell” if it rotates 360 – but it’s NOT a tablet. I think it’s important to get the terminology right here otherwise it’s misleading for people. The vendors will offer misleading descriptions of their products, but as technophiles and early adopters we have a responsibility to avoid falling into… Read more »

From here on, I’ll start calling them a Laplet.

When it’s in tablet mode, don’t the keys get accidentally pressed or damaged? I liked the other Dell design (XPS 12 I think it was) with the clever side hinges, so the keyboard wasn’t facing out

I would hope the device would detect when the hinge is all the way out and would disable the keyboard temporarily until it’s rotated back around.