HTC is reinventing itself, and it’s focusing on each and every one of you. The company wants to help everyone “live a brilliant life” and their products are going to bring out “U”. HTC says they want to reignite innovation, and they’re looking not just at how we all use our phones, but why. “Brilliant U” is certainly HTC’s much-leaked, somewhat-teased new direction, embracing individuality. HTC wants to connect us all as individuals and make their phones adapt to how we use them, and they’re making their case tonight.

“U” heralds the launch of a new franchise of devices with the announcement of two new phones: U Ultra and U Play.

The big focus is obviously on the HTC U Ultra – it’s a 5.7-inch device with a Snapdragon 821, 4GB RAM and a QHD display with a much-rumoured secondary display (2.05-inch 160×1040) up top. We’re not entirely sure that this style of phone still warrants the term “phablet” in 2017. The secondary display that sits above the main screen is driven by HTC’s new HTC Sense Companion onboard software, which we’ll get into shortly. There’s a high-end version of the U Ultra that’s got a sapphire glass finish, too.

The HTC U Play seems like it’s the slightly more down-range device at first with a 5.2-inch 1080p screen and a Mediatek processor inside, but with 3/4GB RAM and 32/64GB storage it’s not exactly a slouch when it comes to courting the power user. HTC says it’ll be “slightly more affordable”, which isn’t surprising.

Both phones feature a gorgeous new construction and design language, something we’ve been wanting to see from HTC for a while now. The company’s bringing back rear glass, with a stunning finish it’s calling liquid surface. The glass looks and behaves similar to a liquid in terms of its light-handling properties, reflecting light in a beautiful way – just check out some of our photos of the devices for a better look.

Both phones feature USB-C ports … and no 3.5mm headphone jack. Instead, HTC’s shipping USB-C headset called USonic that analyses your inner ears and adapts the audio output from the phone to your unique ear structure. The U Ultra also features HTC BoomSound Hi-fi Edition, which places a tweeter at the top of the phone and a woofer at the bottom. Hopefully there’ll also be a USB-C 3.5mm adapter included…

This year there’s also a big play on colour, with HTC placing a big focus on the Sapphire Blue variants of the phones – and this pleases me greatly. If you’re not of the ilk that likes a blue phone, never fear – there’s also Brilliant Bblack, Ice White and Cosmetic Pink on offer. These colours may vary by market, but as soon as HTC puts a blue phone in my hands I think they know they’re not likely to get it back.

Finally, both phones are wonderfully thin without feeling too thin – at their thickest point there’s just 7.99mm between your palm and the front of the phone, and the contoured glass rear makes it feel even thinner in your hand.

There’ve been plenty of rumours about the cameras in the lead-up to these phones launching, so let’s get to them. 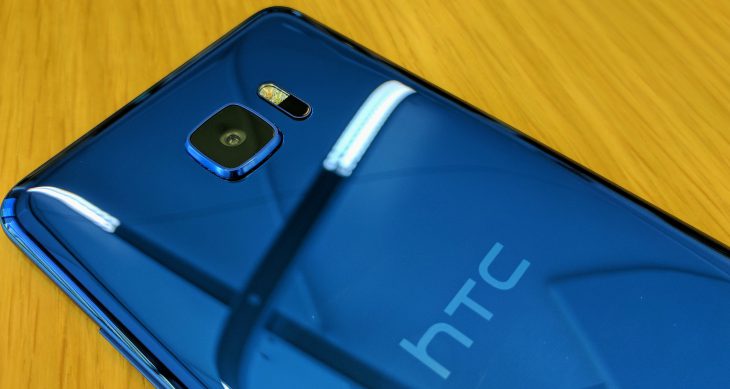 HTC’s calling the U Ultra’s rear-facing camera “UltraPixel 2”, and says its the “best performing camera” they’ve ever made. Bold worlds. a well-overdue technological development (the UltraPixel camera is a few years old now). UltraPixel 2 is a 12MP BSI unit with dual LED flash, laser and phase detection autofocus – kind of table stakes there, but its main party piece is its rather large 1.55μm pixels (the same size as the camera in Google’s Pixel phones), an f/1.8 aperture and built-on Optical Image Stabilisation. As someone who’s turned into a bit of a smartphone camera junkie over the last few years, this has me pretty excited.

By comparison, the U Play’s camera is a bit more standard – it’s a 16MP BSI unit with phase detection autofocus and an f/2.0 aperture. Don’t go writing it off though, it’s also featuring Optical Image Stabilisation so it should be able to capture some damn nice images.

I’m a big believer in OIS, despite the slight bump it adds to the rear of the phones. I’m expecting both phones to be able to pull off some bright, vibrant and richly detailed shots, especially as they both feature an Auto HDR mode. The proof will be in the pudding though — or in this case, the review.

Both the U Ultra and U Play feature a new front-facing camera that’s a hybrid of a traditional camera and HTC’s well-regarded UltraPixel technology. It offers users the ability to switch between shooting traditionally at 16MP or activating UltraPixel mode for low-light “Ultra Selfies”.

The U Ultra also has four always-on, low-power microphones around its surface, allowing the phone to pull off 3D audio recording when taking video. It’s HTC’s hope that this might also assist in production of VR content as the recorded audio should be more useful to artists. 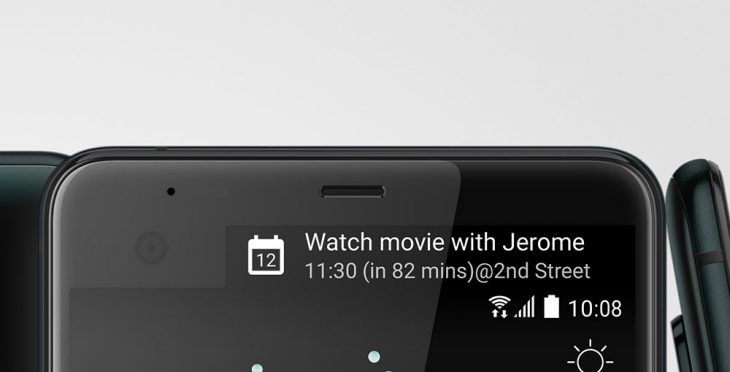 Software, and the Secondary Display

The company’s big push on the software front is Artificial Intelligence. It’s a pretty broad area in which to play, so HTC’s defined their interest in a pretty straightforward way: your device should react to unprompted interactions to enable your brilliant life (there’s that mantra again).

The HTC Sense Companion app powers this push on your device. It watches how you use the phone and learns from your actions. Everyone will start with the same out-of-the-box experience, but over time it’ll learn more about you and place frequently-used contacts, information and even some widgets into the secondary display of the U Ultra.

In the demonstration we saw of the U Ultra, the secondary display showed notification icons while the main screen was off, but also featured a series of swipeable panels containing things like Spotify playback controls, weather and frequently-used contacts (with the ability to initiate a call or text from the secondary display without distracting you from whatever’s happening on the main screen.

It’s not entirely clear yet precisely how app controls and related widgets can get added to this area – there doesn’t seem to be an API for app developers to work with yet, and it feels like HTC might prefer to learn about its users needs more over time. I’d also like to see an indication that HTC intends to add different messaging mediums to its measure of frequently-used contacts. I certainly contact people on Facebook Messenger, Twitter and Telegram more than I use a phone call or SMS, so I hope that’s taken into account.

HTC Sense Companion also plays into HTC’s desire to add voice control to your phone – it’ll help you navigate your phone, take calls and handle alarms. It’s also listening for the “OK Google” keyword even when the screen is off, and will lock to your voice so only you can control your phone.

While we’re pretty up on the HTC U Ultra, with last year’s Snapdragon 821 running the show it feels like there’s still room for something more powerful in HTC’s 2017 device lineup. Perhaps a premium U series phone is just around the corner at Mobile World Congress?

It’s early days yet for HTC’s new U range and the company isn’t ready to talk price or availability yet. HTC says we’ll be hearing more about those details (along with Australian carriers) in the coming weeks, but the company has usually found favour with Australian retailers and carriers, so if you’re looking at get on board with the new HTC U phones we think you’ll definitely be able to find one that suits “U”.

What do you think of the new HTC U series? Are you looking for a U Ultra or a U Play? Tell us in the comments!

They better price these correctly…and with even iPhones getting some degree of water-resistance, Sony’s top-end devices (X Performance, XZ) both water-resistant, and Samsung’s S7 (and likely the succesors too) being water-resistant, HTC need a long hard look at that. It is a selling point.

One of the HTC 10’s failings has been price. Since launch, it has been stubbornly overpriced compared to its Samsung rivals, and it loses out on several fronts to them.

HTC need to look at more aggressive pricing, and no the Pixel is not a benchmark…I think the pixels are severely overpriced for the hardware.

HTC was the first to do lots of things. They did some really nice work with metal unibody phones and dual cameras but no-one seemed to buy their phones. Now they have decided to go the other way. Who can blame them. I still prefer their skin to Samsung and frankly that is enough for me these days. I’ll be more interested in real world use case reviews. Specs are deceiving as we know. We slam HTC for not innovating but applaud Chinese manufacturers for outright copying Apple and Samsung but doing it at a cheaper price. I’m wondering if… Read more »

Seems like the standard of “innovation” in phones is getting lower and lower. HTC is supposedly reinventing itself and reigniting innovation… with a feature that came out on an LG phone over 2 years ago. Hardware features specific to one Android phone are always going to struggle as they’ll never receive the same development interest as Android core features, so the least they can do is make them actually interesting and potentially useful. But HTC themselves don’t really seem to know what the point of this feature is. Any amount of money says this is the first and last HTC… Read more »

Only one rear camera?? I guess all premium phones this year will have two rear cameras.

sapphire display on the 128gb model – like that. Are there any other phones out there with this?

Pretty disappointing surely there must be something g else up their sleeves for mwc.

The rear camera bump and flash looks identical to the S7 wonder if the unit is related.

Cameron Jones
Reply to  who

That’s due to the OIS, so if you say a camera bump on any phone you know it has OIS.

Having no 3.5mm headphone jack is no great loss. I ended up with a iPhone 7 plus and initially thought having no headphone jack was going to be a deal breaker but it honestly made no difference. I’m not much of an apple fan and would be happy getting a HTC Ultra (my previous phone was a Microsoft 950XL, previous to that the M9 & M7). My wife likes Samsung, I don’t ? She’ll no doubt end up with a Note 8.

I am excited for the phones coming out this year! The HTC U variants look great! The hardware sounds awesome, my only issue is the battery sizes look a little low, so will have to see how the review goes and how it will stack up to LG and Samsung.
Any word on fingerprint scanner and waterproofing? As they really should be standard by now.

The fingerprint scanner is embedded in the home button on the front Cameron. I have no idea about waterproofing though.

tried to find confirmation but there has been no answers on waterproofing, so won’t know until review units are sent out.