The sheer number of leaks and rumours surrounding the upcoming release of the Samsung Galaxy S8 is mind boggling and unprecedented for Samsung. One may suspect that Samsung may be driving it all to drum up hype about their comeback phone. Today a case maker has sent what are apparently the dimensions of the Galaxy S8 and the S8 Plus to GSM Arena.

Following on from the three case renders which were based off the final dimensions and schematics for Samsung’s upcoming Galaxy S8 that were leaked earlier today, GSM Arena were sent the dimensions of the S8 and S8 Plus.

The Galaxy S8 Plus apparently measures 152.38 x 78.51 x 7.94mm with a whopping 6.3in display. Even with this massive display the actual phone dimensions are shorter than the Pixel XL which is 154.7mm tall (and also half a millimetre thinner). This big display of course results in a slightly wider device. 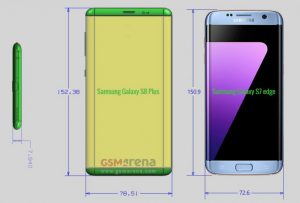 The other dimensions GSM Arena received were for the Galaxy S8 proper. With a display size of a decent 5.7in it’s dimensions are 140.14mm x 72.20 x 7.30mm. Samsung have reportedly decreased bezel size on the upcoming Galaxy S8 and according to these dimensions that seems to be correct. The Galaxy S8 will have a bigger display than the Galaxy S7 Edge but be only the size of a Galaxy S7 which is an amazing engineering feat if true. 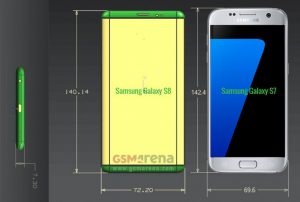 With such a large display and yet a small device it makes you wonder how big the battery will be and how hard they will push it, especially after the Note 7 battery fiasco. One thing you can be sure of, Samsung will test the hell out of that battery before releasing it to the world.

With an announcement expected at Mobile World Congress we will have boots on the ground to check it out so stay tuned to Ausdroid for further information.

Yes I agree. Headphone socket, expandable memory are a must.

If they keep the headphone jack, don’t take away any useful existing features (IP68, best camera, SD card, etc), and S8 non-Plus has the same internals as the Plus model, I’m in!