Home Mobiles Lifeproof Frē cases join the Google Store in the US … but... Lifeproof make great cases for mobiles, which are designed to take your precious phone just about anywhere. Since I first tried one last year (for the LG G5), I’ve rather liked what Lifeproof have done with the Frē; I was able to take my phone to Bali, swim with it, drop it on tiles, kick it across the hotel room floor … and it survived the abuse just fine.

Since I moved from the LG G5 to the Google Pixel, though, I’ve been missing that rock solid protection, and the ability to take my phone into the pool, the surf, or wherever. I was rather impressed to see the Lifeproof Frē listed on the US Google Store this morning .. but sadly there’s no sign of it on the Australian store just yet. Why am I excited? It gives your phone an IP68 rating for water and dust resistance, and MIL-STD-810 spec drop protection. Yes, that’s military grade.

If you’ve used a Pixel, you know that it doesn’t really love taking a beating, and the Lifeproof Frē is a case which can help it survive such torture. Until then, I guess, there’s the OtterBox Commuter (which I’ve also been using), but it isn’t even remotely waterproof.

For $89.95 it isn’t cheap, but if you want that kind of protection for your phone, you’ll know it doesn’t come cheap.

We’ve asked Lifeproof to fill us in on their plans to bring the Frē for Pixel to Australia, but in the meantime, you can always buy one through other places which may (or may not, it seems) be official retail partners, such as the curiously-named (and probably trademark-infringing) Lifeproof Case Store starting at $89.95.

I did a search of the part number and Techbuy dot com dot au have the Pixel 5 inch case starting at $71.50+ delivery

interesting they have it in stock, as the office Aus distributor is showing ETA as TBC – has been since pixel launch… 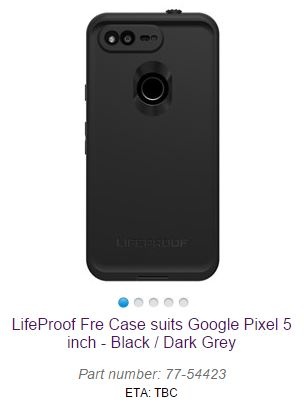 Sorry I meant official, not office.

So expensive. Most 2016 premium phones are water proof but not Pixel.

Well, I just received an Australia Post delivery tracking email from the LifeProof Case Store for my pre-order, so I’ll know soon if they are any good.