Home News and Editorial Analysis: Was it Samsung’s ambition that ultimately led to the demise of... 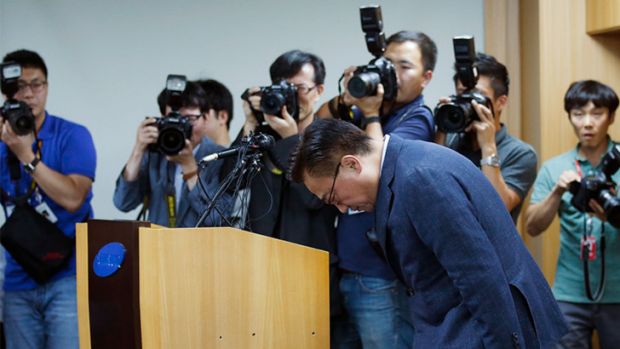 We know, we know. The coverage (and sensationalist reporting by others) around the Note 7 has gone on for long enough, and this will likely be our last coverage of the topic; we feel, like many, that the saga has dragged out in a rather embarrassing fashion for Samsung, and with the release of their investigation findings into the Note 7 issues today, the chapter will hopefully draw to a close.

While the investigation made clear findings as to what went wrong (basically, defective batteries), Samsung kept rather quiet on the why, with some minor admissions from Samsung’s DJ Koh (pictured above) about what could have led the Korean giant down this path.

Samsung has always been ambitious. It entered a smartphone market already dominated by Apple’s iPhone, and clearly saw a place where it could catch up, become the equal, and stream ahead — something that, come 2016, Samsung has very clearly achieved. The Galaxy S7 range was undoubtedly the best Samsung smartphone yet, and was easily the better of Apple’s offerings at the time.

One suspects, though, that this wasn’t enough.

Some surprising take-outs from the Samsung press event

During today’s live stream, Samsung’s Koh slipped a few things in an otherwise mostly unremarkable press briefing given by any executive.

First was his admission that the Note 7 was to be the best phone the company had made. A tall order, when you consider how well made and received the Galaxy S7 range had been. Samsung had identified two main learnings in its years in smart technology, and those were these: mobile devices need to have greater, richer multimedia experiences to satisfy user demands, and those experiences require more and more power, either through optimisation or larger battery capacities.

Second was his admission that, to make the Note 7, Samsung set the specification for the batteries to be supplied. It’s not the case that Samsung simply selected an off-the-shelf product. No. Samsung almost certainly specified a battery of a certain capacity, to fit within a certain physical space, and those demands were just that: very demanding. Samsung wanted a 3,500 mAh battery, definitely at the larger end of batteries we’ve seen in current-generation mobile devices, and it had to fit into a rather small space. It wouldn’t be removable .. and that alone could have proved to be Samsung’s undoing.

On these points alone, we can conclude that Samsung’s ambition to fit so much power into such a tight space was the Note 7’s undoing; it simply sought to do too much with the available technology.

The third interesting inclusion wasn’t an inclusion so much, but an omission. Samsung didn’t once name either manufacturer of troubled Note 7 batteries … nor did he mention that the largest of those two manufacturers (by a number of orders of magnitude) was Samsung itself – it’s subsidiary, Samsung SDI. Curiously, one of Samsung’s expert investigators did mention Samsung subsidiaries a couple of times, but this was glossed over very quickly.

Undoubtedly this was a clever move by Samsung; to admit that it was its own subsidiary that had so badly messed up would’ve been rather embarrassing, and worse still, mud sticks. Samsung SDI might have very little to do with Samsung’s smartphone business (I have little doubt they’re run at quite some length from each other), but if Samsung were to come out saying that the majority of issues were caused by Samsung-made batteries … well, that wouldn’t reflect well on the Samsung brand as a whole, not at all.

No, Samsung’s conference today was a well orchestrated, intelligent pitch to regain trust: in other words, exactly what it had to be. Create the understanding in the mind of the audience that Samsung had made a capable, well-designed, intelligent phone — which it had — and that it was brought unstuck by unnamed battery manufacturers who had defective manufacturing processes.

Could a removable battery have avoided the issues?

Now lets’ circle back to the non-removable battery. Removable/replaceable batteries are, almost always, delivered in a rather robust packaging; plastic casing, rigid sides and corners, designed to withstand the weakest link in the process of changing/replacing a battery — the user.

In short, they are designed to withstand precisely many of the kinds of things which ultimately led to the failure of the Note 7 battery.

Unlike removable batteries, non-removable batteries are not firm, rigid, wrapped in plastic or hard edges. No, they come in a polymer pouch which is no more rigid than a sandwich bag or a bag of microwave rice. This is very susceptible to infringement, perforation, damage, deformation and the like. It’s this fact which brought Samsung SDI’s batteries unstuck; because so much had to be fit into such a small space, there was very little tolerance around the edge of the battery cell within the pouch. In fact, the internals were so close to the corners that any deformation of the corners of the battery would have led to a short circuit and failure.

When you couple that with manufacturing issues, leading to incorrect placement of electrodes within the cell itself, the tight wrap of the polymer encased cell, and the miniscule tolerances within the pouch itself, was almost certain to lead to failure.

The issues affecting the second batteries, from Hong Kong based Amperex Technology Limited, were different. It wasn’t tight tolerances, or poorly designed pouches which caused the problem. No, it was plain old imprecise manufacturing, undoubtedly brought about by the fact that ATL had been asked — in a VERY short timeframe — to significantly ramp up its manufacturing capability to provide batteries for a whole swathe of replacement Note 7’s.

This is what the evidence shows. It was flaws in the manufacturing process that might — in other circumstances — have been detected and addressed which led to failure of the ATL-made batteries. Poor welding, components being left out (like insulating tape.. that sounds kind of important) … the ATL batteries were just as destined and likely to fail as the Samsung SDI batteries, though for different reasons.

So, was it ambition then?

I have to say yes. Yes it was.

It was Samsung’s ambition to make the Note 7 the best Note there had been, and perhaps even the best phone there had been, or would be for a while to come. Samsung almost achieved this. We considered this to be the phone of the year last year, if it hadn’t been catching fire.

It was Samsung’s ambition to fit a large battery in a slim, premium device when perhaps the capability wasn’t there to make such a thing reality. There’s reasons why other manufacturers don’t have giant batteries in svelte, premium handsets, and chief amongst them was probably the inability to do it safely.

When the issues arose, it was Samsung’s ambition to quickly address the issue, identify a means to get the Note 7 back on track, and led to the ‘Safe’ Note 7’s being released with batteries made by a manufacturer which simply did not have the capability, quality and process checks in place to make them safely.

In short, Samsung rushed it. They wanted to make tomorrow’s phone today, which is admirable, but the technology wasn’t up to it, and when problems arose, they were too hasty to point out a fix which wasn’t actually a fix.

Samsung almost certainly didn’t want to pull the plug on the Note 7 so quickly, after it had invested so much in making it happen. The cruel irony is that if Samsung had acted in a slower, more thoughtful manner, and had taken its time to address the Note 7 issues the first time around, it might have identified the faults, and been able to re-tool to avoid them, instead of rushing with a quick fix that ultimately destroyed the Note 7 entirely.

I was talking to a friend about this article and they suggested the issue was that Samsung specified “3,500 mAh” etc. but forgot to say “and doesn’t catch fire”. More seriously, great analysis. Poor Samsung, you’d think that if two batches of batteries failed it was the device, but in fact two separate and unrelated failures

Edit: related only by the spec and, as you say, ambition

nice summary, ambition is a good way to sum it up (and haste) Some good discussion around the removable battery, but if all was equal (capacity/space) then a removable battery internals would have been more (or just as) cramped… something had to give (and it did). It has been given the mantle “favourite phone of the year” by a number of outlets, which is then caviated by the situation. But feels like it achieves this high regard by not being available and “what it could have been”. So it was an easy strike by Samsung to call it the best… Read more »

I’d say that not making the battery removable was Samsung’s biggest mistake.