When last years IFA trade show passed with nary a mention of Samsung’s new flagship tablet range, the Galaxy Tab S3 being announced it was a bit of a head scratcher. With the Note 7 fiasco behind them and no Galaxy S8 launch coming up, it’s looking likely that we’ll get some new high-end tablets at Mobile World Congress.

The tablet, at least one of them has shown up on benchmarking site GFXBench, and we can check out at least some of the specs on the tablet. Along with a Snapdragon 820 SoC, the tablet specs list 4GB of RAM as well as 24GB (it’s probably a 32GB model) of storage and will likely come with a microSD card slot as well, though this isn’t listed. The tablet will also have a 12MP rear camera and 4.7MP front camera.

The tablet will have a large 9.6″ 2,048×1,536 resolution display making it slightly smaller, and marginally more pixel dense than the previous Galaxy Tab S2 model which came with a 9.7″ screen with the same resolution. 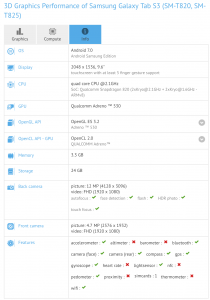 The high-end tablet range is certainly lacking in Android at this point in time, though 2-in-1 form factor Chromebooks with Android apps are certainly making a case for doing away with tablets for the most part. Still, if you’re a tablet fan it’s nice to know that Samsung is still wanting to supply something in exchange for a wad of your hard earned cash.

If I wanted 4:3 ratio I would buy a bloody iPad! Waited too long for another tablet fail. People want to watch movies on their tablets!!

hopefully, this tablet would have high-end SoC unlike the S2. iPad prices with mid-range SoC!!!

If they have the courage (he he) to release an 8in model I’ll likely buy one.

my 16GB TabA is underpowered. wouldn’t mind a high-end Android tablet to go with my iPad Air2