Home News and Editorial How to Watch The Super Bowl In Australia: Circa 2017 It’s that time of year again when one of the biggest sports in the world reaches it’s pinnacle and once again it is really easy for us Aussies to tune in — to the Super Bowl that is. As it was last year it will be easy for Aussies to watch the fifty-first incarnation of the Super Bowl, on any device, assuming you have a data connection.

Once again there are several ways to watch the Super Bowl (can I just abbreviate that to SB now? I’m already getting sick of typing it) and which way you use will be determined what you want to get out of it, where you are, and what device you have.

For keen fans such as myself you can purchase a subscription to the NFL Game Pass app that gives you every game and other material such as the draft) from now until 31st July 2017. It also give you access to:

Sounds great, and it really is, in my opinion, but the kicker is that this will set you back $59.99AUD for access to the Super Bowl and everything else until July 31, 2017. This will allow you to watch the game on whatever device you want, your phone, tablet, PC, Chromebook or Android TV. There is a cheaper option for just the Super Bowl and all game replays until only 17th February for $34.99AUD. While the NFL Game Pass app cannot be installed on Android TV (officially), it does support Chromecast from any device. Australian content providers should take note at their full and seamless implementation of Chromecast (including the fact it can run on rooted devices unlike AFL and NRL apps this year).

If you are watching on your phone this may present the best option, although it is the most expensive option. Watching live with NFL Game Pass will give you all the cool SB ads as well.

This is by far the cheapest and easiest option for Australians. 7Mate, as they have with all Playoff games this year, will be televising the SB live. If you are in front of a TV just switch over to 7Mate and sit back and enjoy the show. If you are nowhere near a TV the game will also be streamed through the 7 Network’s PLUS7 app or via the new Freeview FV app. Remember it will incur data charges (unless you are still on the $2 days from Optus). A big downfall of this option, and one that rules it out for some, especially our esteemed editor Dan, is that you will NOT get to see the cool (*expensive) SB ads during the stream. 7Mate will have their own ads which I can guarantee you won’t be anywhere near as creative as the USA SB ads.

Remember too, that the 7 Network also has an AndroidTV app for those running an embedded AndroidTV panel or set top box which you can grab from Google Play.

Yet another way to view the Super Bowl in Australia is for those who have Pay TV. If you have a subscription that includes the sports channels, particularly ESPN, then you can watch the Super Bowl on here as well. Foxtel of course have their Foxtel Go app that will allow you to watch it on the go on your mobile device. The ESPN feed will often have the US ads so if that is what you are after, and you have a Pay TV subscription then this could be the go for you. 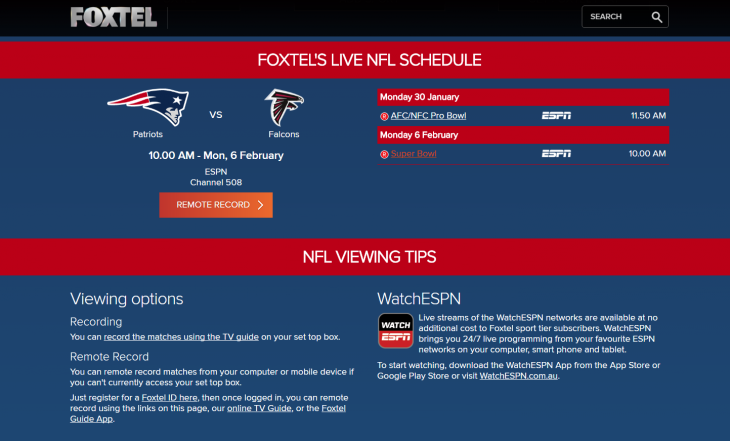 For those in the States Fox Sports will be streaming the game live via their website, their Fox Sports Go app (although Verizon have an exclusive on smartphone viewing in the States so this may not work from your phone — but will from a tablet) and also via their VR app. It is free to watch via their website and app but the VR viewing requires a Fox Sports cable subscription to be eligible. To watch Fox Sports (US) you will need our favourite online friend, a proxy or VPN. If you just set your proxy to USA you will be able to stream the Fox Sports website game to your tablet or PC. Unless you can figure out a way to get access to a Fox Sports US cable subscription the only reason I can see to watch this stream is to see the SB ads in all their glory. If you do manage to get the requisite cable subscription you can grab the APK file from APK Mirror (it is geoblocked).

Our favourite VPNs and proxy here at Ausdroid seem to be PureVPN and Unblock-US – but essentially any of them will work. With so many options to watch the game I’ve neglected to mention the most important part — the time of the game of course — 10am (AEDT) Monday 6th February with ESPN also offering replays at 4pm and 9pm.

So settle in and prepare yourself for the biggest day on the USA sporting calendar. This year we do not have to miss out. It will be interesting to see if Tom Brady’s Patriots find redemption for Deflategate or if Matt Ryan can cap off one of the greatest seasons by a quarterback ever giving Atlanta their first ever Super Bowl win. Who are you going to be supporting in the big game?

How can your favourite VPN be pureVPN? Just signed up and after connecting to US or UK not a single website will load. Play store reviews are terrible recently too

Interesting. I’ve been using them since I joined up for the 2-year plan we saw a while back. No issues for me