Home News and Editorial Samsung’s bringing the features you love into the midrange; Galaxy A5 and... 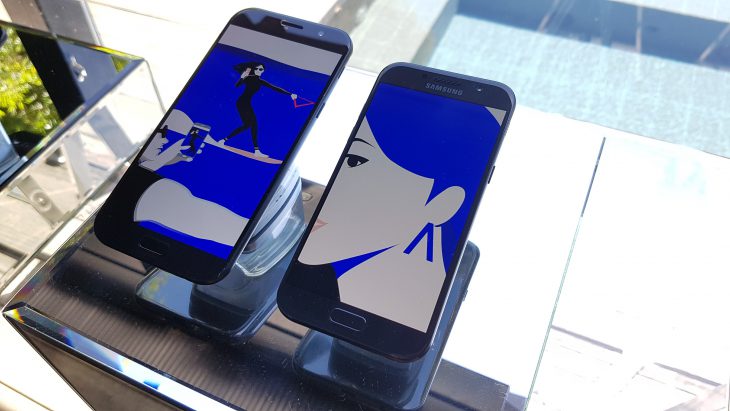 Samsung hosted a briefing in Sydney today to introduce Australia to its new Galaxy A5 and Galaxy A7 phones. The company is bringing some great value to the Australian midrange market, bringing “the features you love” down from the Galaxy S7 into the midrange A-series devices. We didn’t see these devices in Australia last year, so a big welcome is due to these new midrange powerhouses.

The big news is that you’ll find them online from next Thursday at the Samsung store, at some pretty decent prices. Firing a shot across the bow of some of the other players who’ve come to embrace our midrange market, the 5.2-inch Galaxy A5 is a serious contender for your money at $649, while the larger 5.7-inch Galaxy A7 comes in a bit higher at $799.

Physically, the phones bear more than a passing resemblance to last year’s Galaxy S7 series with a similar metal-and-glass body and finish, and they’re also offering the same water-resistant IP68 rating. They’re slightly thicker and heavier than their forebear, and the rear curve is contoured slightly differently. The bottom-mounted speaker has been switched up for a side-mounted forward-firing speaker – perhaps a sign of things to come to the Galaxy S8.

The phones pack 16MP front and rear cameras with an impressive f/1.9 aperture – the kind of setup that wowed us in 2015 with the Galaxy S6 although there’s no optical image stabilisation offered here. They’re also slightly thicker, which accounts for the complete absence of the camera bump protruding from the back.

Continuing the trend of bringing features down from the premier device range, both devices feature Samsung’s gorgeous Super AMOLED displays with bright screens and excellent viewing angles. The Galaxy S7’s “always on” feature is also starting to make its way downmarket, a welcome addition to these handsets.

Finally, there’s also a fingerprint sensor in the home button, Samsung Pay is fully supported on the devices, and they’ll obviously pair happily with your Samsung watches (and probably others). Battery size is predictably different between the devices too, with a 3,000 mAh battery in the smaller A5 and a whopping 3,600 mAh in the larger A7. Interestingly (or not), they’re USB-C devices with the fast charging features we’ve come to love in the Galaxy S6 and S7. Samsung’s got some accessories on offer for the phone too, in the form of cases (the Neon Case offers some super bright colours, and there’s also a traditional S-View Case) and they’re also pushing a new water-resistant bluetooth speaker, the Level Box Slim that was unveiled at CES. I picked up the phones and had a play at and found them to be speedy and responsive. Today’s event took place in a bright sunny venue in Sydney’s eastern suburbs, so there’s no sneaky camera samples worth looking over (every phone camera does well in that setting). My personal preference is for the A5, whose smaller size is more appealing to me for one-handed use.

Samsung’s put in a solid effort in these two phones, and continues to offer compelling choices to customers in both the smaller/standard and larger size classes.

We’ll have a full review of the 2017 Galaxy A series in the next few weeks. You can order one online from Thursday, and Samsung’s promised they’ll see carrier availability at a later date.

Will you be checking out the Galaxy A series? Is the A5 or A7 right for you? Tell us in the comments!

From where can i purchase these handsets in Sydney? (not online)

The only one I ever cared about in the A range was the A9 or A9 pro! Who cares about the boring A5 or A7!

C7 much cheaper and probably good enough for many?

Would be interesting to compare these to high end phones released a year ago in regards to pricing.

These phones actually look good. The only Samsung phone I’ve owned has been a Galaxy Nexus, and I’ve been fairly negative towards Samsung from the start as I’ve never liked their software implementations. The A5 is actually a very good performer from some video reviews I’ve seen and gets very close to the S7 at 2/3’s of the price. There aren’t a lot of good phones in the ~$600 price range or cheaper with a screen around 5 inches for one handed performance with a solid build and performance. Could I make a small request and get you awesome guys… Read more »

Hope the A5 filters down to Vodafone. I am over premium phones and the A5 could be a great compromise.

They had to bring the A series this year as an alternative to those who are not ready for the S8 changes. The thin bezels, no home button, fingerprint scanner location and no flat screen variant will not be everyones cup of tea, so this model offers a familiar look and feel for those who like Samsung as it is. Any idea on the CPU/RAM specs for the Aussie market?

Thanks champ, looking forward to a review..

I have profited $104k last year by freelancing from my house a­­n­­d I did it by w­o­r­k­i­n­g part-time f­o­r 3 or sometimes more hours /daily. I was following a money making model I stumbled upon online and I am happy that i was able to make so much money. It’s user friendly a­n­d I am just so happy that i discovered this. Here’s what I did… STATICTAB.COM/msxjhtx

Awesome phones, did not expect this!

EDIT: No A3? Very disappointed. Also those prices are silly, won’t sell crap all.

I wouldn’t be so quick to judgement there; these phones are around 40-50% cheaper than the S8 range, with about 80-90% of the same stuff. I think they may do alright.

The phones you mentioned are not mid range. Mid range would be the R9s, Moto Z Play etc, all phones around $600-700.

As I said, it depends what you consider to be mid range.

A question was asked about the A3, the answer was that it’s small and the local market likes large screen phones.

I’m less down on the price. The midrange has a lot of breathing space these days as the high end moves upward, $500-600 is a common price for a midrange phone now. I’m kind of ignoring the A7 because it’s huge and kinda out of that spec range

Maybe, but its definitely a shame.