Telstra has announced new apps and accompanying deals for the upcoming 2017 sporting season for NRL, AFL & Netball, which are all included for Telstra plan users (post-paid mobile). However, if you’re not a Telstra post-paid mobile customer, you’re going to pay quite a bit per month to access these services.

The new service, which we came across during tonight’s Channel 9 news, will allow Telstra mobile customers to live stream every NRL, AFL and Netball game without using any of their included data allowance.

Non-Telstra customers can access the services too, but there’s (fairly obviously) a cost involved; NRL and Netball will cost $12.99 per month, and AFL will be $14.99 per month. The other consideration is that these services will count against data usage on other networks, so your mileage may vary.

Here is a list of the apps and what they will offer:

Also, if you have a Telstra TV/Roku Device, there will also be New Telstra TV Netball app that will become available, although it is unsure if this will be done through an update, but the app is said to bring with it the following features:

Telstra advises that the apps are available to download now, so if you’re a Telstra customer, give it a try, and if you aren’t, you can try it too if you’re prepared to pay a little for access to the streaming services.

Do note, though, that if you have a rooted handset, you won’t be able to access the new Telstra services, with the apps popping up an error message saying “Your device appears to be rooted. This application cannot run on rooted devices”: 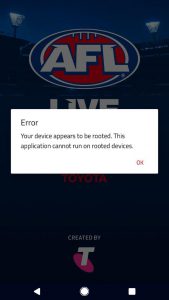 This is also available to Telstra “PRE-PAID” subscribers with a minimum of a $30 a month re-charge,