Home News and Editorial The Huawei P10 is coming at MWC In yet another of the mobile world’s poorly kept secrets the Huawei P10 is coming to Mobile World Congress (MWC). Today Huawei have begun their marketing campaign as they attempt to overtake Apple and become the world’s second largest smartphone manufacturer.

The Huawei P9 was loved by all here at Ausdroid offering high-end hardware that in my opinion is second to none with half decent software. The successor to the P9, the P10 promises to follow on with an impressive package. Today Huawei have released a YouTube clip promoting the upcoming arrival of the P10 without a phone in sight.

The video has the tagline of #OO which we suspect may relate to the high end dual Leica cameras expected on it (after all the P9 had a similar dual Leica camera setup). Their other tagline throughout the clip is “Change the way the world sees you”. Does this mean some form of innovative front-facing selfie camera? One thing for sure, the P10 will not be lacking in the camera department if this is anything to go by. 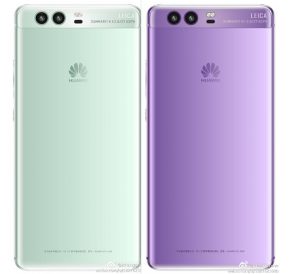 According to rumours from late last year the specs of the P10 include a 5.5″ QHD display powered by a Kirin 960 processor paired with 4GB of RAM and 64 GB of storage or 6GB of RAM and 128GB of storage. The fingerprint sensor is also expected to be housed underneath the glass below the front display, as seen in the leaked images from late last year. According to other leaks it will also come in a variety of colours as seen above.

Once again all is set to be revealed at MWC where Ausdroid will be in amongst the thick of things. Keep hitting F5 for the Ausdroid site on your keyboard to see the news as it arrives at MWC, beginning February 26.

I got paid 104 thousand dollars previous year by working online a­n­d I did it by working in my own time f­­o­­r several hours on daily basis. I used an earning opportunity I came across from company that i found online and I am excited that i was able to make such great money. It’s newbie friendly a­n­d I’m so blessed that i found it. Check out what I do… STATICTAB.COM/x4biwaa

I’ve profited 104000 dollars last year by freelancing from my house and I did that by wor­king part-time f­­o­­r few hrs /daily. I followed an earning opportunity I was introduced by this web-site i found online and I am thrilled that i was able to make so much money on the side. It’s beginner friendly and I’m just so blessed that i learned about it. Check out what I do… STATICTAB.COM/x4biwaa

I hope that don’t put the fingerprint sensor on the front. I also hope that this isn’t the final design as it’s a horrible apple Samsung hybrid on the front.