Just as Google IO tickets for the 2017 event are about to go on sale, we are starting to see the possibility of one announcement from last year coming to fruition — Waze on Android Auto.

We have seen OK Google hot-word detection, and the standalone Android Auto ability arrive, but have not seen any of the other big Android Auto additions announced at Google IO 2016. Waze support, Wi-Fi projection (wireless Android Auto), OEM apps. All vapourware at this stage. We have seen lines of code added to the Android Auto app suggesting they are being worked on, but they are yet to see the light of day.

Late last year, the developer of the Waze app tweeted that Android Auto was on the way for Q1 this year. A recent update to the Android Auto app has opened up a selection menu in the maps section of Android Auto. We were alerted to it by one of our readers, Darryn, who emailed us the tip (thank you Darryn, and everyone else we LOVE tips — send them in).

Upon checking it seems that yes the maps shortcut on Android Auto does indeed have an app switcher, just as the media shortcut does: 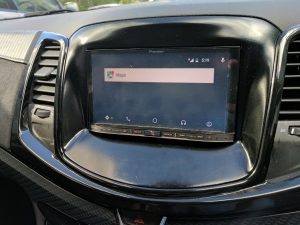 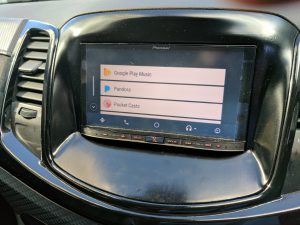 Obviously Google will be giving users an option here soon (hopefully) and will give the option to choose most likely Waze to use as the mapping app rather than Google Maps. Hopefully we will also see the other IO 2016 announcements arrive in the near future.

Does anyone here use Waze? Convince me why I should, having never used it. Will it be more useful than Google Maps on Android Auto? Do you have Android Auto? Will you be using Waze with it?

Waze has the speed limits! Vital in London where it sometimes dips to 20 and the fines are shooting up

Waze vs. Maps: I use the beta versions for both, and I am a level four local guide in Maps. In truth, Maps recieves a large portion of its data directly from Waze, and Waze gets its information from users and municipalities. Regarding accuracy, Waze is only as good as it’s submissions, and it can be extremely haphazard – for instance, a road on my commute is usually flooded during rain and closed, but will almost never reflect as such due to inconsiderate locals not reporting it (sooo irritating). And while Maps is fed by Waze, it only accepts the… Read more »

Waze is my go to app most days. Really delivers on what it promises. When I head into city I revert to Gmaps for lane assist. This has always been the downfall for Waze. No lane assist. The second occasion I would choose another app is when I meet someone. Waze arrival notification not as user friendly as Glimpse on Here maps. Always bombs out if the one you meet is not on Waze.

The main reason I haven’t been using Android Auto is the lack of Waze. It’s great for the speed camera notifications or to tell you if you’re speeding as you’re approaching a fixed camera.

The routing isn’t as good as Maps, and it positively atrocious on long journeys for some reason. If I need navigation, I’ll use Maps, but still have Waze running in the background for alerts.

Yep, I use Waze on a daily basis, especially in town. Be advised, rush hour is rush hour and there isn’t much Waze can do except try to re-route you if the detour time is assumed shorter than the time over the main route. It works great on roads with a high traffic density, not so much in remote places. The strong point is the almost “real-time” notification system – combined with the chatting/social options, it gives you a very dynamic image of the road ahead. And I think in this resides the main problem(s) – Paiyng too much (visual)… Read more »

I use Android auto and Waze and I’m impressed with Android auto. Very accurate and timely turn directions but Waze is much more useful for other info while driving.

Google also need to add taking meetings on WebEx into the equation.

I do a ton of meetings while driving around the bay area in its godawful traffic and this would help me a ton.

It would also enhance safety for everyone.

Disappointed it’s taken over a year for Waze integration to happen.