Google’s Pixel phones are good looking, fast, and they’re secure as hell. The Pixels not only have extra security and encryption (which complicates custom recoveries immensely), they include a dual partition system for updating the OS in the background. The background updating is a great idea for seamless OS updates, just as Chromebooks do it but if you never plan on updating through Google’s OTA process there’s something else you can do with that dual partition and it’s a lot more fun.

When the Pixels first arrived with dual system partitions I was shooting the breeze with some folks on XDA about the possibility of dual booting these partitions. We suspected it might well be possible if we could figure out how these partitions worked. Why would you ever want to do this I hear you ask? Many reasons. The main one being root access. Some apps such as Pokemon Go, Snapchat and Android Pay will NOT work with root access. There are ways around some of these but they are complicated and often troublesome (eg. Xposed – which isn’t available for Nougat yet, Magisk root, etc) and can sometimes stop working when apps update etc. 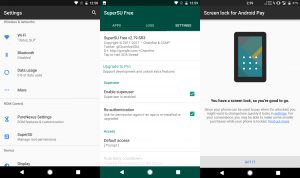 Of course there is only one way to know for sure if this worked — test it out, so I did. What follows is the step by step process to get dual boot working on my Pixel XL, but considering the Pixel has the same partitions it should work the same for them (untested though unless you would like to donate a Pixel to the cause so if you have a Pixel proceed at your own risk). For those wondering about Android Pay etc and the SafetyNet Check read back over my article from last year on how it is bypassed.

The following instructions can also be used as a “How to flash a custom ROM to your Pixel” instructional piece so read on if you are at all interested in that. Flashing custom ROMs and kernels etc for the Pixel phones is very different to the process for previous phones although sometimes it sounds more complicated than what it actually is IRL.

First step is to install a custom ROM or kernel to your already rooted Pixel. At this stage I am assuming you have “rooted” your Pixel and installed the latest TWRP (custom recovery). If you have not done these I encourage you to visit our earlier instructional piece following the XDA links to the most up to date SuperSU and TWRP.

The difficult part to get your head around with the Pixels is that when you boot into recovery it boots into the current boot slot (termed slot a or slot b) — dual boot partitions and dual system partitions remember. Then when you flash a custom kernel or SuperSU it flashes to the CURRENT slot that it has booted from and is currently in in recovery. On the flip side though, if you flash a custom ROM it flashes to the OTHER boot slot (just as Google intended it to work for their “seamless updates”).

Okay, now that you know why we have to do things differently, here are the steps required to flash a custom ROM onto your Pixel: Now for the interesting and surprisingly easy part — installing the same ROM as a dual boot. For this example we will assume you have a custom ROM like I do on boot slot A, running ElementalX kernel with SuperSU installed. It can also be performed by flashing/fastbooting the stock ROM to the both slots.

At this stage I have not managed to get it working on two totally different ROMs, most likely due to the data partition that is shared requiring different data items for different ROMs. It certainly works for a stock ROM running a custom kernel (there is a stock kernel with the SafetyNet check patch over at XDA if you want to do this on the stock Google ROM).

Although the Pixels have been out for several months now it is still early days around the developers’ understanding of the security features and partition scheme of this new device. In the future I can envisage this whole process being semi-automated by a specialised recovery or app. Until then though if you have a use for it, or if you just like to tinker like me then you now know it is possible and how to do it.

This is awesome Scott – Not a Pixel owner unfortunately but love geeking out to these kind of posts.

thanks guys. I enjoy living on the edge and testing these things out and then sharing them