The result of a year of Research & Development, Oppo is looking to take the lead in cameras with a ‘breakthrough’ they’ve named the ‘5x Project’. 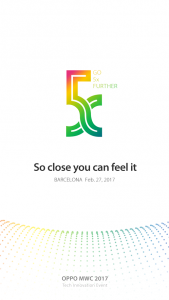 In recent years, Oppo has been focusing on the camera as one of the more important specs in their phone releases. The ‘Selfie Expert’ F-series phones have been well received, as have the R-series phones which includes the R9s that uses the IMX398 sensor that Oppo says they co-developed with Sony.

We chose MWC to unveil the ‘5x’ technology in the belief that we can inspire the industry to aim higher, and continue to create pioneering products that give amazing experiences for consumers.

Oppo last year launched ‘Super VOOC’ charging, as well as smart image stabilisation which we’ve seen in somewhat limited capacity on phones released over the last 12 months. We’ll be checking out the Project 5x at the Oppo booth at MWC to see what this new tech has to offer.