The closer we get to Mobile World Congress, the more photos that have begun to leak out to the internet for the upcoming Samsung Galaxy Tab S3, and the it would seem these new leaked photos have given us a much better idea of what will set the Tab S3 apart from its predecessors.

What we can see in the photos is that Samsung is looking to replicate its build materials we have seen over the last couple of years with its flagship devices such as the Galaxy S7/S7 Edge and the Note 5/Note 7. It seems though that the Tab S3 will have a glass back and metal frame instead of the usual plastic or metal back.

That being said, unlike the upcoming Galaxy S8, the Tab S3 would still have capacitive navigation buttons along the bottom bezel, as well as a physical home button come fingerprint scanner.

The main focus here really is that the Tab S3 will come with that glass panel on the back which if indeed correct does mark a big change for its tablets which have mainly been made out of Polymer plastic. 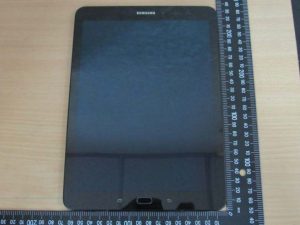 We won’t have long to wait now for the suspected announcement of Tab S3, with Samsung making its presentation February 26th at MWC and we will have all the action from MWC right here on Ausdroid.