In the first major announcement out of Mobile World Congress, BlackBerry is back with a brand new Android-powered smartphone, complete with physical keyboard and fairly sharp pricing for the Australian market.

TCL Communications is welcoming BlackBerry to their portfolio tonight, launching their first licensed BlackBerry product – named KEYone – at MWC 2017, along with a hint that we’ll see more products launching later in the year.

You’ll recall that TCL was responsible for building the last couple of official BlackBerry phones – the DTEK 50 and 60 – so there’s a prior relationship between the companies but the new phones are officially manufactured under a new global licencing relationship with BlackBerry.

The new public face of BlackBerry is now BlackBerryMobile.com, with a new team dedicated to ensuring the best experience for customers. 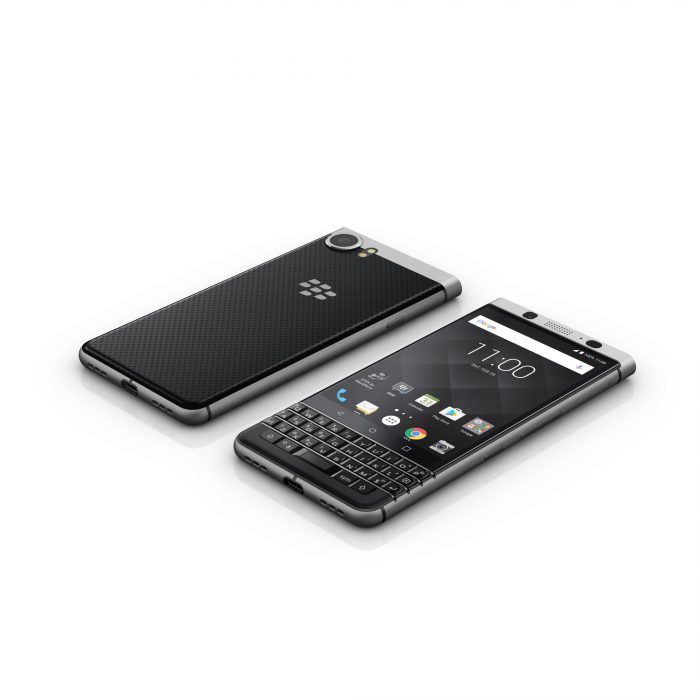 At first glance, the KEYone looks like it could be an original BlackBerry product. Of course, it’s got a physical keyboard (what BlackBerry would be without one?) and there’s a chunky, anuglar edge with metallic highlights from its anodized aluminium frame and a soft-touch black back. It looks to be the very definition of how you’d update BlackBerry’s design in 2017.

Like any BlackBerry phone worthy of the name, the phone features a 4-row, 35-key backlit keyboard covering a little over a quarter of the front of the phone, above which there’s a 4.5-inch impact resistant screen with a 3:2 aspect ratio (a not-unpleasant 1620×1080 resolution).

There’s a couple of surprises hidden in the keyboard, too – a fingerprint sensor is built into the space bar and the whole panel features capacitive touch sensitivity, allowing you to use classic BlackBerry-style features like flick typing and some fancy touch gestures to speed up your input. There’s interesting design decision brought about by the placement of that physical keyboard, too – Android’s navigation keys are rendered here in physical form in what looks to be a capacitive touch area just above the keyboard. It means that your home key is actually in a pretty foreign location, about a quarter of the way up the device.

It’s probably a decision that makes sense after some time using the device though, and BlackBerry claims that the KEYone provides more usable screen space because of this design decision.

Considering the press materials have an obvious focus on camera in the KEYone, the camera’s presence in the actual presentation this evening was quite light. The specs on the camera look decent though, with a 12MP rear camera (a Sony IMX378 sensor) meeting the current trend of large 1.55um pixels and an f/2.0 aperture. On the front you get an 8MP fixed-focus camera with a wide angle 84 degree field of view, also sporting a large 1.125um pixel size.

BlackBerry is typically heavily into their security, taking time to tell us how security is at the forefront of the manufacturing, hardware and software design.

The company’s DTEK software is key to the show, along with a hardware security layer drilling right down into security keys inside the processor. DTEK allows users to customise what information they want particular apps to have access to, with examples given on stage ranging from millenials sharing absolutely everything to a perhaps more restrictive corporate profile that might not want so much information getting out.

We know that Android’s monthly security updates present an interesting challenge for some OEMs, and BlackBerry tonight committed to keeping pace with these updates on the KEYone – a great way to establish trust with consumers. The spec that might disappoint some, and has split opinion amongst our MWC team, is the processor – if you’re a processor snob. The KEYone’s powered by a Snapdragon 625, a 2.0-Ghz octa-core CPU with an Adreno 506 GPU. It’s worth remembering that this is a step up from the older 6xx Snapdragons though, and BlackBerry is keen to point out the benefits – 2x performance, and power saving. As it’s only driving a 1080p display this should be plenty of power for day-to-day usage.

BlackBerry is also proud of the KEYone is built to last, with a 3,505 mAh battery inside. With Quick Charge 3.0, it’ll get to 50% battery charge in 36 minutes. The phone’s also sporting a USB C connector in the centre of its bottom edge.

Finally, the KEYone has a now-standard 3GB of RAM on board, with 32B of storage and a MicroSD slot that’ll support up to 2TB of expanded memory.

The KEYone will ship with Android Nougat 7.1 on board, and will see regular updates to keep pace with Android’s monthly security patches.

Preloaded apps are BlackBerry’s suite, which seems to run to the DTEK security software alongside BlackBerry Hub and of course, BlackBerry’s well known BBM Messenger.

With the device hitting global markets from April at US$549, we’re looking at a May/June launch for the KEYone in Australia, with a very positive AU$799 price point. There’s no information yet on any prospective carrier deals, but we’ll let you know when we find out.

The KEYone is at Mobile World Congress, so we’ll definitely be looking to bring you a hands-on report over the course of the week.

Are you excited for TCL’s first official BlackBerry phone? Sound off in the comments, and let us know if there’s anything you want us to get from our hands-on time.

It looks like a great device.
Could well be my first Android device since the Nokia X2..

I’d love to see it on a carrier here in Australia.
But just like SliceyDice has said, in all likelihood, we’ll need to import.

I’m this close to buy it from Clove since I don’t see it to appear locally thanks to bad sales of Priv. Moreover Telstra just recently removed Classic from their range and I don’t believe if they will be any interested in keeping that.

I’ll probably update my business use Priv to one.

“It looks to be the very definition of how you’d update BlackBerry’s design in 2017.”

As a longtime Blackberry user (work issued) I completely agree, and think it looks fantastic. I’d love one of these for work in place of my iPhone 5S! Although having got used to swiping keyboards, I’m not sure I could go back to physical keys? And i’ll happily stick with my Nexus 6P for personal use.