This morning Huawei took to the stage at MWC 2017 and announced not just the P10 and P10 Plus but two new watches running Android Wear 2.0 — the Watch 2 and the Watch 2 Classic.

The Huawei Watch 2 is hardly a surprise having been fairly extensively leaked in previous weeks but the Watch 2 Classic is a nice surprise. The Watch 2, as expected, is a “sporty” watch with a 1.2in circular display, Snapdragon Wear 2100 processor and a 420mAh battery. The Watch 2 has full LTE capabilities (SIM card slot) and still has two days of battery life according to Huawei. It also includes NFC for Android Pay, built-in GPS and is IP68 water and dust resistant.

The Watch 2 housing is a plastic polymer, ideal for those sweaty workouts. The Watch 2 comes in both LTE and Bluetooth only versions and are priced accordingly. Hopefully the lack of LTE in the Bluetooth version makes it a bit thinner.

Both watches only have two buttons unlike LG/Google’s watches that have three. At this stage it is unknown if the AW2.0 nivigation is performed using the bezel or just using the tap of display method. The guys on the floor at MWC will hopefully find out for us soon. The other difference is that these watches only have 2GB of on-board storage which is disappointing. Both watches also have a special “watch mode” where the devices can last for up to 25 days without recharging while still displaying time and tracking steps. 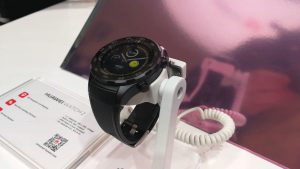 The Huawei Watch 2 and Watch 2 Classic are available from “next month” in first release markets, of which Australia is one. Although we don’t have official prices just yet, expect the Watch 2 to be around the $500AU mark (329 Euro) for the Bluetooth version and $580AU (379 Euro) for the LTE version. The Watch 2 Classic only comes in a single version and is likely to set you back around $620AU (399 Euro). These prices are direct conversions from Euro so be gentle to your wallet and add the Australia Tax before committing to buy one.

For those with expensive tastes Huawei seem to also be making a Porsche Design smartwatch which, although not mentioned in the announcement, did manage to make a quick appearance in the slideshow. Considering the price of the Porsche Design Mate 9, expect this to be a hefty price and to offcially not make it to our shores. Huawei will be bringing the Huawei Watch 2 to Australia towards the middle of the year, with precise range, pricing and timing to be confirmed.

Why would they go from 4GB storage with the OG HW to 2GB? My HW uses 1.75GB of its 4GB just for Android Wear, so I can’t imagine that 2GB is correct. Also, the Classic is a Huawei Watch 2 without LTE, but it’s more expensive?

1.2″ screen!!! Yay. I know Ausdroid readers voted for the 1.4-1.6″ screen device and so you settled on 1.5″ as a compromise but lots of votes for less than 1.4″ were discounted. I prefer smaller devices as a rule so I am biased but think your ultimate smartwatch should have been 1.4″ based on the value ranges you assigned for the pole and how readers voted. Huawei have shown you the way by downsizing from their original watch 😉

No rotational input at all. Screen is considerably smaller than the OG Huawatch.

I get that you have to make some compromises – but these weren’t quite the compromises I was expecting when I was anxiously awaiting this announcement.

yeah. have to agree with you Dan, what was a must buy has become an unlikely purchase. The bezel is too large for the small display. I’ll continue with the SW3 as my weekender for now.
The lack of rotational input may be because Huawei apparently had this watch ready last year and Google added the rotational input after this?

Valid point re the watch itself being ready before Google added rotational input. I’m not in a huge rush, and I guess I’ll see what life is like without rotational input on the OG Huawatch when that eventually drops. It might be workable – but the smaller screen is insane, especially (as you said) given the bezel size.

Huge steps backwards if you ask me. But, they can make these business decisions. I’m now more tempted to at least try the LG Watch Sport (if ever that comes back in stock).

David Ruddock at Android Police just released his hands-on impressions with the device (he’s had it for 24 hours). It’s scathing in its analysis.

I can’t/won’t link to it here, but it’s worth a read if you care to track it down.

Looking forward to hearing what Chris, Duncan and Jase think of it when they get some actual hands-on with it (they seemed really positive about it in yesterday’s MWC podcast).

David Ruddock scathing??? That doesn’t sound like him lol
I’ll wait until some other tech reporters give an impression before beginning to form an opinion.

Is it confirmed there is no rotational input? Other posts I’ve seen had speculated, rather hopefully, that it might have a rotating bezel instead of a crown but I haven’t heard any official announcement on lack of or inclusion of rotation support and how it’s implemented if included.

There was a hands-on video by Alex Dobie at Android Central that confirmed that the bezel does not in fact rotate.

Very sad 🙁
Thanks for the info 🙂