Home Mobiles Huawei unveil the P10 and P10 Plus at Mobile World Congress with... At Mobile World Congress, CEO of Huawei Technologies Consumer Business Group Richard Yu has taken to the stage to unveil the latest Huawei P-series phones the P10 and P10 Plus.

The phones are a follow up to one of our favourite pieces of hardware from last year, the P9 and look to have taken many of the things we loved about the hardware and tinkered where necessary to make them just that little but nicer.

The P10 and P10 Plus are going to launch in a range of colours that are inspired from a collaboration between colour experts Panetone and Huawei. Colours like Dazzling Blue and Dazzling Gold make the cut, as do the usual colour options like Ceramic White, Mystic Silver and of course there’s Rose Gold and Graphite Black. Huawei isn’t just introducing new colour options, they’re working on new finishes with the Dazzling Blue and Dazzling Gold available in new diamond cut finish that is resistant to fingerprints, scratches and importantly non-slip. The rest of the series will come in the usual sandblasted matte surfaces we’re used to.

The cameras are where it gets a little more interesting for the P10 series. Huawei have leveraged their relationship with camera company Leica again this year to supply the camera technology, this time on both the front and the rear of both phones.

The P10 series again has a dual rear camera setup with a 20MP monochrome sensor and a 12MP full colour sensor on the rear making for a sharper, more crystal clear shot with higher detail thanks to both sensors working in tandem in software to create a highly detailed and colour accurate shot. The P10 Plus does get a slightly better f/1.8 aperture verses the P10’s f/2.2 but it’s going to come down to real world usage to decide how this goes. 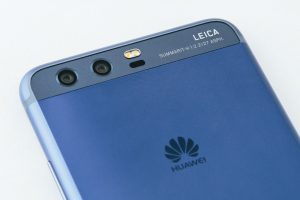 The front camera on the P10 series is an 8MP sensor behind an Leica lens with an f/1.9 aperture and has some interesting tricks with software including 3D face detection for an amazing Leica Portraiture Mode. The camera software is also your friend when it comes to ‘groufies’ as well, sensing when you’re taking a selfie or there’s more people in there and automatically expanding to a wider angle to ensure everyone is in the shot. It’s a neat touch that could win some people over.

The big design change for Huawei on the P10 series is the move of the fingerprint sensor from the rear to the front. It’s not a physical home key as you’d expect, it’s still a fingerprint scanner, but it’s also had its functionality expanded to include gestures such as a single tap to take you back or long press to take you home. You can also swipe left or right to scroll through your recent apps list. It’s a departure to what we’re used to with the fingerprint sensor but could be a good user experience once you get it in your hands.

The P10 series come with Android 7.0 Nougat which of course has been customised with Huawei’s EMUI which has been updated to version 5.1. There’s again been some deep modifications here with ‘Ultra Memory’ and ‘Ultra Response’ combining to give you a 20% boost when opening apps when compared to other phones. We’re not huge fans of the EMUI skin here at Ausdroid, however there was movements on the Mate 9 to lighten its touches and it was indeed a faster experience

Huawei will be bringing select handsets from the P10 range to Australia towards the middle of the year, with precise range, pricing and timing to be confirmed.

Would’ve loved the green one but I hate playing the “will they or won’t they” game when it comes to third party OEMs and Android updates (plus EMUI is still awful).

Now if it was a Pixel on the other hand….(hint hint Google)

i so wanted ot love EMUI but you are right, it is still awful. They spend too much time trying to fix things that arent broken.
I am still of the opinion that a really blue Telstra pixel will arrive here before too long- it has landed in Canada and the UK now so surely we are next? #hearditherefirst