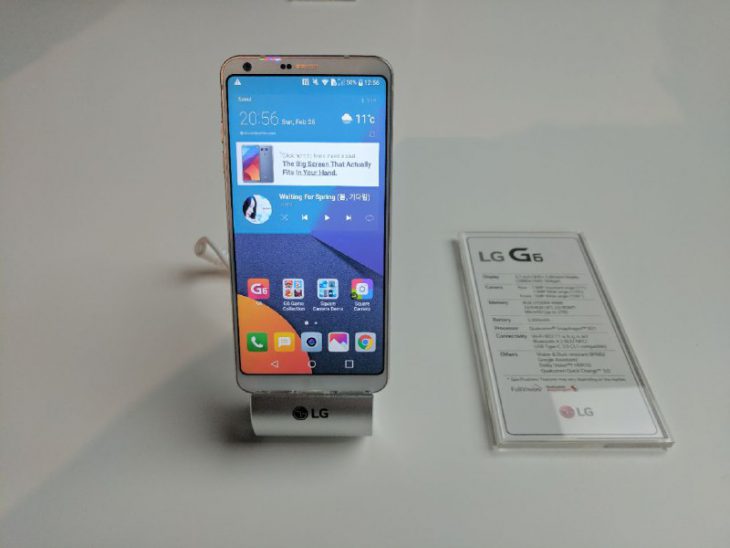 Following the LG G6 Day event here in Barcelona we got the chance to get a quick hands-on with the newly announced LG G6. We weren’t able to get our hands on a take home unit immediately so here’s our impressions from the show floor.

LG has definitely achieved a slightly different look for their LG G6, which in a world of increasingly same same devices is an achievement in itself. The new 18:9 screen ratio combined with the rounded corners of the display, think bezels and a very small “chin and forehead” does give the G6 a distinct visual look all of its own.

The metal sides, Gorilla glass front and curved glass rear panel along with the G6’s in hand feel definitely makes this device deserving of the term ‘premium’. The engineering tolerances are as you would expect from a top flight device and the in-hand feel is great, partly because it is that little bit thinner.

For those who haven’t seen the full specs here they are.

In our discussions with the on the floor staff, we’ve also been able to confirm that the G6 will NOT be Daydream compatible. We also found out that the display is an LCD so we’re guessing that with a Snapdragon 821 and 4GB of RAM it’s the screen that led to this.

Unfortunately, the devices on the show floor weren’t configured and there wasn’t any connectivity so we weren’t able to test out much of the phone, especially the inclusion of Google Assistant, the first non-Google Phone to include this feature.

Apart from that, the software was distinctively LG with the main settings menu being sorted via tabs and not a complete list. However, a quick trip to the overflow menu and you’ll soon be back to the stock appearance. LG’s normal touches are elsewhere but this didn’t seem to be too heavy-handed. I had a quick play with the camera and it definitely zoomed in and out very smoothly and the wide format mode on both the front and rear sensor is a differentiation that does bring some advantages. Having the choice which mode to use and how “zoomed” in to be is really a nice feature.

We really need to get some more quite hands-on time with the G6 to get a good idea of how this device performs, however from my quick time with it I’m quietly hopeful. Telstra has announced that the LG G6 will be exclusively available through them and will launch in the coming weeks.

This will be a carrier exclusive, though. Either at launch or shortly after, you may be able to buy the LG G6 outright from other retail outlets. We have asked LG Australia and will let you know what we find out.

Ausdroid— do we know what version we’re getting here in Aus? Are we getting the US wireless charging one or the Asia HiFi DAC one?

Wireless charging is overrated… I hope we get the DAC version! Although some reports are saying there will be a third version that has neither wireless charging or the DAC 🙁

I’m not a GEEK, so bear with me, its narrower, shorter than my G flex, dose it have ”SWIPE-A-SIDE” that’s novel. Love the pics, more ppi. It hasn’t got the curved screen, (Shame). Yes the screen ppi on the G Flex SUCKS, but still a nice phone . So G6, YES from me?

does it really have to say “Australian” hands on?

I think they are kidding.

The advantage of Ausdroid over any other Android website is that they can test hardware and software in Australia and see how it works with our mobile networks and geo-restrictions etc etc. So, having an Australian check out technology is cool when they happen to be in Australia. Not so useful in Barcelona but that is the point of the irony/joke in the title. At least the hands belong to an Australian.

That’s pretty much the point. Hands on by an Australian. I’m glad someone picked up on it 😉

So sick of phones being ruined with glass!

Android Police would be wrong; it’s not an OLED, its a standard LCD.

Don’t care about daydream so no loss there for me. Still waiting for S8 or HTC to announce something, then decide from there.

How can you compete with the S8 by being Telstra exclusive? I’ll be looking to upgrade on Optus in a few months with their $99 upgrade thingo. Might be getting the S8 because that’s all they’ll have! Was really keen to give the G6 a go.

Any particular reason why the LG G6 isn’t Daydream compatible?

it has an LCD display, which typically cant achieve the equried latency for daydream

I’d really liked the design of this phone but there has been some really weird decisions. Major spec differences between markets (Quad DAC, Wireless Charging etc), not having 64GB base storage available everywhere (or at least in Aus) and now the exclusion of Daydream… What is LG thinking, seriously. I’d loved my G2 (ironically has roughly the same about of bezel around the screen) but since then they really lost their way.

Yeah, the G2 was a little ripper. One of my favourite phones too.

Im keen on it, purplexed by the 5Mp front camera for 2017, SD821 means it will drop like a stone in price rather quickly.

I would give any LG a year before buying to see if the bootloop issue persists.

Telstra exclusive? Well that means it’s not on my list anymore. These companies limit themselves by restricting to one carrier.

Nothing impressed at all. Looks like just a phone for last year.

Yeah that’s what I was thinking. If they released this a few months ago, they might have sold a bunch over the holiday period. Now, it will just be overshadowed by everything else (and not even Google Assistant will distinguish/save it).