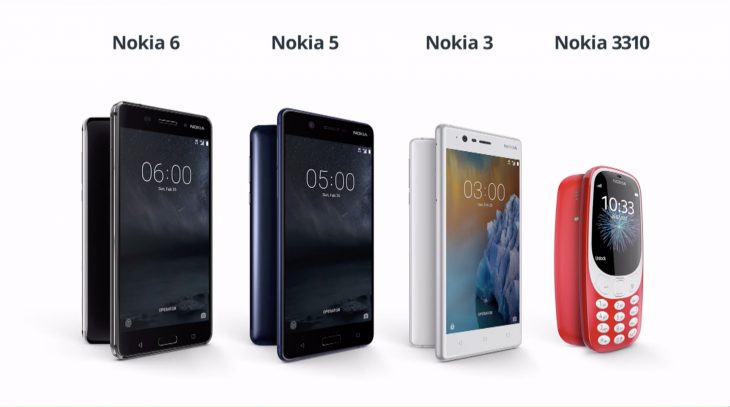 Nokia have had a turbulent existence in the past few years. Lately through licensing partner HMD Global, the Nokia brand has returned to consumer phones and they’re attempting to get the brand back on track with the release of smartphones running Android. Today at MWC 2017 in Barcelona they have announced four new phones.

Nokia took to the stage espousing their unwillingness to fight in the specs race, instead selling us that they are obsessing about the real world experience, on the things that really matter. They plan, with their Android phones, to go beyond the specs and bring integrated technologies to the consumer. Updates will be provided to the latest version of Android in the future and those announced today will all launch with Android 7.0 Nougat. All security updates will be rolled out immediately and every single Nokia Android phone will come with Google Assistant built in.

Earlier this year Nokia released the Nokia 6 in China. The Nokia 6 sold out of their first allotment in just 23 seconds and their customer satisfaction was at a massive 97%. Of those who purchased the Nokia 6 a whopping 74% were of the”new generation” meaning that their sales are not based on sentimental reasons from older customers.

Nokia’s first announcement today was a global version of the Nokia 6. The Nokia 6 has a 5.5in, 1080P LCD display protected by Gorilla Glass. Powered by what appears to be a Qualcomm Snapdragon 430 processor (according to the Chinese edition’s specs) and 4GB of RAM Nokia are relying on their “purest form of Android” to keep it running smoothly — which will be Android 7.0 Nougat. There is 64GB of on-board storage with a microSD slot to expand the memory. The rear camera is a 16MP shooter and the front 8MP.

Available in the standard colours of Matte Black, Silver, Tempered Blue and Copper it will retail for €229. There is also an Arte Black (piano finish) special edition to celebrate the global launch of the Nokia 6 which will retail for €299. 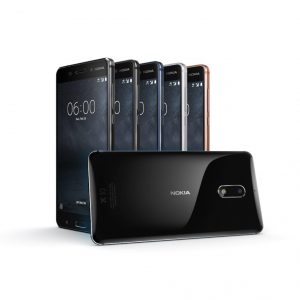 Next up was the Nokia 5. Like the Nokia 6, the Nokia 5 is also crafted out of a single piece of aluminium with the antenna located at the top and bottom of the device, and not the back like so many other aluminium phones. The 5.2in HD display is protected with Gorilla Glass once again and is powered by a Qualcomm Snapdragon 430. It’s design brings attention to detail in a robust package. Available in four colours — Matte Black, Silver, Tempered Blue and Copper — the Nokia 5 will retail for €189. 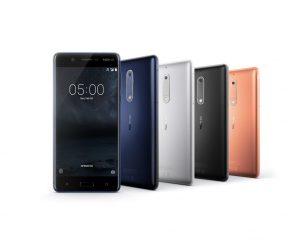 The Nokia 3 is designed to bring a stylish device at an affordable price. It has a 5in 720P display with Gorilla Glass inside a polycarbonate body with an aluminium frame. The front and rear cameras are 8MP run by a Mediatek MTK 6737, quad-core 1.3Ghz processor and 2GB of RAM. there is just 16GB of on-board storage but that can be expanded with the microSD slot. The battery is no slouch either for such an affordable device clocking in at 2650mAh. Available in Silver White, Matte Black, Tempered Blue, Copper White it is retailing for just €139. 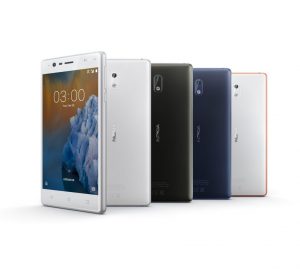 Nokia pulled a “One More Thing” and also announced the redo of the Nokia 3310. The Nokia 3310 is similar to the original one. This has a 2.4in QVGA display, a 2MP camera and a microSD slot. It does NOT run Andorid, instead runs Nokia Seres 30+ OS. It has 22 hours of talk time with over one month of standby time and features Snake and Nokia ringtones. It will be available in four colours — Warm Red and Yellow, both with a gloss finish, and Dark Blue and Grey both with a matte finish. The Nokia 3310 will retail for €49. For Aussies looking to pick up one of these for nastalgia reasons be warned that it is a 2G only phone and as such, with 2G being phased out here in Australia, it will be nothing more than a talking piece on the shelf very soon. 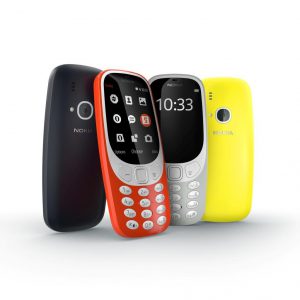 We have reached out to HMD Global for any information on Australian availability and pricing and will update you when we hear more.

I was actually excited about the 3310 re-release until I saw it was a 2G handset. Hopefully Nokia will release a 3G option and I would love one as a backup device.

Thought that 3310 might be a great little backup handset with all that standby time, but it doesn’t look like it has any data capabilities (from the promo video).

I’m more excited about the Nokia lineup than I am for the G6 at the moment.