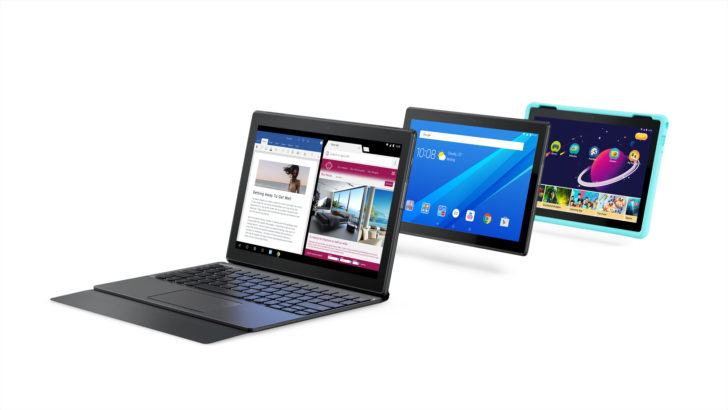 At Mobile World Congress in Barcelona, Lenovo has unveiled a new range of tablets, the Tab 4 in both 8″ and 10″ sizes, with two ranges a standard and ‘Plus’ series.

The Tab 4 series are mostly iterative updates on the previous Tab series, the Tab 4 is again offering Dolby Atmos powered speakers which should make for an impressive auditory experience when viewing multimedia. All the Tab 4 series tablets will offer up to 12 hours of battery life, and run Android 7.0.

The tablets are divided into a more ‘family friendly’ series which tend towards the cheaper side of the market with plastic bodies and HD displays, while the Plus series goes for a dual-glass design with FullHD resolution displays.

Tab 4 ‘Family’
The Tab 4 8″ and 10″ tablet specs differ only in screen and battery size with the rest of the specs looking like this:

The Tab 4 8″ and 10″ will be heading to market in May in Sparkling White or Aurora Black and cost around €169 (around $233AUD) and €179 (around $247AUD), respectively, though pricing will surely change if they arrive here in Australia.

Tab 4 ‘Plus’
The Tab 4 8″ and 10″ specs in the Plus range also differ only in battery and screen size from each other. The Plus series tablet add what Lenovo call a ‘Superior Design’ as well as a fingerprint scanner for improved security. Specs for the tablets look like this:

The Tab 4 Plus series will also be launching in May in either Polar White or Slate Black. Pricing for the Tab 4 Plus starts at €259 (around $357AUD) for the 8″ and €299 (around $412AUD) for the 10″ though again this pricing could change if they arrive in Australia.

Kids and Productivity Packs
As well as the Tablets, Lenovo has also announced Productivity and Kids packs for the tablets. The Productivity pack is simply a a Bluetooth keyboard that also acts as a protective sleeve and stand.

The Kids Pack consists of a shock-resistant bumper, a blue-light filter, and a pair of colorful 3M stickers as well as software features. Kids accounts on the tablets have parental controls allowing parents to set ‘on’ and ‘down’ times via a scheduling tool as well as monitoring content allowed on the tablet.

A selection of curated content from KIDOZ is also included, to provide ‘the best, safest and most exciting experience for kids’. It’s all apparently relevant content for kids including age appropriate games, websites and videos.

We’ll be sending the Ausdroid team past the Lenovo booth to check out the new Tab 4 series tablets and we’ll be checking in with Lenovo Australia about local availability and pricing.