Memory maker SanDisk has announced this week that they’ve released a new 256GB Extreme version of their A1 microSD Card.

Partnering with leading manufacturers HTC, Huawei, Lenovo, MediaTek, Oppo, ZTE and more, the new card will take full advantage of the new A1 specification. When paired with a compatible device SanDisk are saying the card will provide a faster experience such as when loading apps. 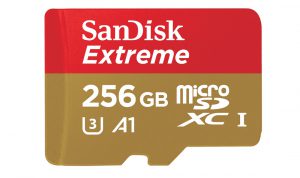 Dinesh Bahal, vice president of product development and Client Solutions, Western Digital has said that “By specifically addressing app performance, A1 is a real game-changer for the industry. We are excited to play a significant role in the evolution of the microSD format, and work with the top smartphone technology manufacturers to offer more advanced storage solutions,”

From what we understand, the A1 spec allows SanDisk’s microSD cards to manage random read input-output access per second (IOPS) of 1,500 and write IOPS of 500. In real terms, this means you’re looking at up to 100MB/s read speed; and up to 90MB/s write speed.

As we all know that with the introduction of Android 6.0 (Marshmallow) and Android 7.0 (Nougat), users can expand storage capacity on smartphones by selecting the microSD card as preferred or adoptable storage. Basically, this means that apps can now be loaded and launched quickly from the A1 microSD card.

SandDisk has said that The 256GB SanDisk Extreme microSD card with A1 will begin to become available globally from late this month (March), though no set specific date was provided for and will be available for a USD RRP of $199.99 (AUD$261.19 approximately).

It may be possible in theory but I know for one I can’t see any way of allowing it on my Moto X Play. I could really use the extra storage as the Vodafone version only had 16GB storage 5 of which is used by the OS.