Home Mobiles OPPO F3 and F3 Plus to be announced in China on March... The popular Oppo F1 is about to be replaced by a pair of new models, with Oppo starting to invite local press to an unveiling of a new ‘Selfie Expert’, which is believed to be the Oppo F3 and F3 Plus.

The invites are for an event in China on March 23rd and the tag ‘Selfie Expert’ was used for the F1, so while the Oppo F3/F3 Plus aren’t specifically mentioned, it’s likely this is their launch event. Oppo seems to enjoy skipping even numbered models, so the F3 is the likely successor to the Oppo F1.

The invite has an intriguing large and small circle front and centre, which is likely indicating a dual-camera setup on the front, something backed up by a leaked spec sheet for the Oppo F3 Plus.

The spec sheet for the phone lists a Qualcomm Snapdragon 652 (MSM8976), 4GB RAM/64Gb storage (with microSD card) and a 6″ FullHD resolution screen. Most importantly the sheet lists a front-facing camera setup with 16MP + 8MP, a good reason to have a larger and smaller circle in the invite. 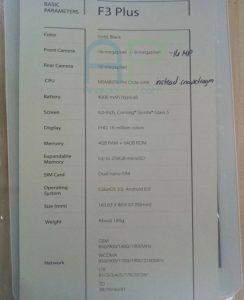 Importantly you can see from the LTE bands listed that all the major LTE Bands (3, 5, 28 and TD-40) are covered, so we will likely see the F3 launching here in Australia. Given the positive response from both Phil and Duncan on their reviews of the Oppo F1 and the Oppo F1s, as mid-range devices the F3 and F3 Plus would both be welcome additions.

Whether the Oppo F3 will have the same dual-camera setup on the front remains to be seen. The event is scheduled for two weeks time in China so we won’t have too long to wait.