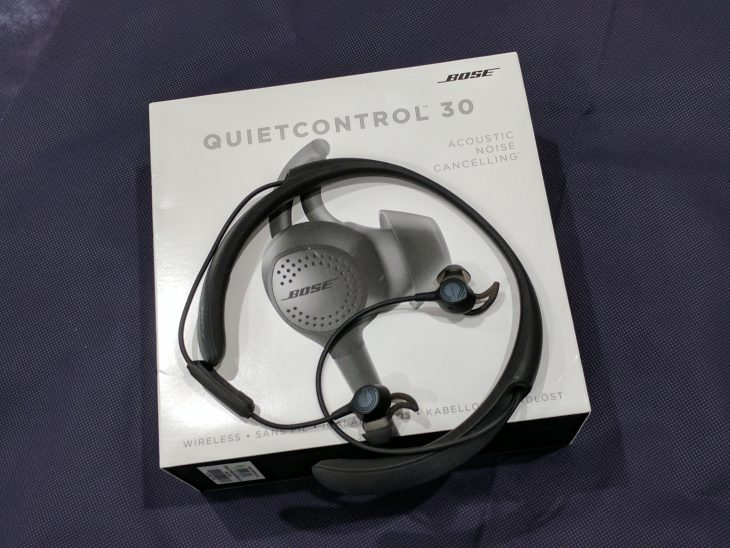 Here at Ausdroid we get to try out some really cool products, and it is absolutely one of the perks of the gig. Needless to say, when the opportunity arose to review the Bose QC30 wireless headphones I jumped at the chance. I love my high quality sound, and that’s what I associate Bose with.

Why? The very name Bose is synonymous with high quality sound, and has been for years. Whether it be speakers, headphones or earphones, when you buy a Bose product you know what you are getting. High quality sound. The QC30 wireless headphones aim to continue this legacy of Bose in a whole new form factor. Bose’ QC25 Noise Cancelling headphones are a defacto fixture on any long-haul flight, and the QC35 wireless noise cancelling headphones are even better still. You bet I was excited to look at the QuietControl 30s.

The Bose QC30 come with the headphones (obviously), a standard microUSB cable for charging, a heavy duty, durable carry case and three sets of the ear buds to ensure perfect fit in your ear. The carry case is solid, hard-walled, zip up case that has a pocket inside to house the charging cable and spare ear buds if you wish to carry them with you. It’s the same kind of quality we’ve come to expect from Bose’ other products.

I would expect the circuitry inside the neck band to be very breakable and thus would require protection while transporting the headphones. The case is very good at this — I would expect nothing less not just from Bose, but from any company charging this much for a set of headphones.

Let’s face it, no matter how good a set of headphones sound you are not going to use them if they are uncomfortable to wear. Being in-ear headphones the QC30 headphones do not have any uncomfortable bands sitting on top of your head, nor have to worry about ear muffs sitting on the ears properly. All there is is 2 x earbuds and a neck band.

I have a thick neck and was worried about the neck back fitting around my neck when I first saw these headphones. I should not have been worried. I was able to wear the neck band around my neck at any time, no matter what I was wearing, even a collared business shirt at work. The neck band was so comfortable that I often forgot it was even there.

I like the Bose earbuds. I have several pairs of Bose in-ear headphones and not only am used to the way they fit into the ears but actually like and prefer the fit to the standard ear bud. I like the way the “shark fin” slots into the ear and holds the bud in place, no matter what I am doing — it can take some time to get the right size for your ear holes but Bose give you three different sizes to try out. I was able to fit them in as easily as all the other in-ear headphones I have. They are comfortable sitting within the ear and could easily be used for an extended period of time without any ill effects.

I touched on the hardware before and really there is not much to it. The neck band is the part of the headphones that set them apart from other wireless in-ear headphones. There are very little in-ear, wireless, noise cancelling headphones around and there is a reason for that — to cancel the noise effectively they need some serious hardware. Bose have decided to put this in the neck band.

The neck band has the power button and the battery charge light and Bluetooth connection light on them (on the right hand side). The power button is a bit disappointing. It is difficult to press, especially when trying to long press to set it into pairing mode. Once turned on the headphones speak to you telling you how much battery is left and also tells you when it is connecting and is connected to a device (and which device it is connected to).

There is an inline remote on the right hand cable. The inline remote has all the usual controls expected of an inline remote — volume up and down, play and pause/stop, hang up phone call, answer phone call. This remote also triggers Google Assistant on my Pixel XL with a long press of the pay/pause button. Although I very rarely use my phone to make calls (quelle horreur) I did test this out a few times and found it easy to use while the sound was clear and easy to understand.

The inline remote also houses two buttons that can be used to alter the amount of noise cancelling the headphones perform. This is handy because if you NEED to hear your surrounds then you can turn it down and hear both the surrounding noise and your music — at whatever ratio you choose.

The headphones rely on the power to work. Unlike most over the ear headphones there is no pass through cable to plug in and bypass Bluetooth so when they run out of battery you are out of luck until you charge them again.

Although this review is of the QC30 hardware I thought the Bose software deserved a mention. I have used the Bose Connect app before and found it very basic and not very useful. Since I have used it previously it has undergone a decent transformation. Especially with these headphones it comes in very useful.

The app allows you to see what level of noise cancelling you have set and to edit it accurately from within the app. The app also allows you to turn on and off the voice prompts, set the auto-off timer, and manage your device connections. There is also a new function that arrived while I was typing this review called “Music Share” that allows the user to share the music to a compatible pair of Bose headphones.

The sound is amazing. I am in the market for a good set of headphones to replace my Parrot Zik which feel like they are slowly burrowing through my skull and are probing my brain after only a few minutes of wearing. I thought I would have to buy another set of over the ear headphones to replicate the high quality sound the Parrot Zik produce. After using the Bose QC30 I have changed my mind on that.

Side by side with the Parrot Zik the Bose QC30 blew them away. The noise cancelling was very similar between the two but the sound coming from the Bose was far crisper. The sound was a lot truer, with each individual note clear and precise. The Parrot Zik was not anywhere in this league (they are going onto eBay this weekend). Add in the fact that the Bose are far more portable and I cannot see why I have kept the Parrot Zik so long.

Comparing the sound of the Bose QC30 wireless noise cancelling in-ear headphones to that from the Bose QC20 wired noise cancelling in-ear headphones it was a very close thing. In the end I had to give the edge to the QC20 but only just. The base seemed slightly better on the QC30 but the clarity of sound and accurate reproduction seemed slightly better on the QC20. Whatever the difference between the two, it was very slight at the most.

The sound when compared to the Klipsch Reference Over the ear bluetooth headphones was not as deep with a narrower sound. The Klipsch provided a greater depth in sound, richer, although once again the difference was very little. The Bose did seem to be a crisper, more accurate sound though.

One thing I did notice with the QC30 was that the Bluetooth signal was good while sitting right next to the device but once you walked a few metres away it struggled. I was still within the specified 10m Bluetooth range and yet the signal became choppy and stuttery. If you plan to use these while walking a distance from your phone I suggest you test out the signal strength before committing to the purchase.

Bose say the headphones can get up to 10 hours of battery life and I have to say for once a company was pretty spot on with its battery life estimation. I was able to watch several Underworld movies, listen to a heap of music and yet still had battery life to spare.

Time to full charge is 3 hours which is relatively long and I suspect this is because of what must be a decent sized battery within the headphones. Headphone manufacturers seem to have not heard of fast charging etc just yet.

I’m no audiophile, I’ll admit to that, but I do like my music and I like it to sound good. The Bose may look weird with the neck back but they sound great, especially considering they are Bluetooth in-ear headphones. I did not expect them to sound this good. Not only did they sound good but were very comfortable. If this sort of earbud is what you are used to you will love them. There is a learning curve to the earbuds and you may need to test out the different sizes to find the correct fit for you.

The noise cancelling was extremely effective and the ability to alter the degree of noise cancelling meant that I could actually hear my surroundings (at times when I desired that). They held their own against all other headphones I have on hand, including the Klipsch Reference headphones. The sound lacked a bit in base and was not as rich as the over the ear headphones but it was a sharp sound that excelled in it’s clarity and accuracy of reproduction.

The downside to the Bose QC30 is the price unfortunately. The RRP is $449 but if you search around you should be able to find them for under $400. High end audio is expensive and you do get what you pay for it seems. For this price you get a top notch sound with a noise cancelling effect in a very portable package. They can be purchased from the Bose website or from your usual high end headphone store.

***Footnote***
Bose were asked about the IP rating of the QC30 headphones and their response was: “the Quiet Control 30 does not have a waterproof rating”. Make of that what you will — best you do not go swimming in them but I would expect day to day use and ear fungai should be fine.

As headphones can't easily or hygienically be re-used, Ausdroid has retained these for Scott's use.