‘Tis the season of leaks, and many of them no doubt originate from the manufacturers themselves. Motorola though have decided on a different tack leaking their upcoming flagship in such plain sight that it is hardly a leak at all.

Many providers are publicly testing their 5G networks using upcoming compatible hardware. Yesterday in New Orleans Sprint tested their “Gigabit Class LTE” showed off the first US 5G deployment on a commercial network live, and they used a “forthcoming flagship premium tier smartphone“. 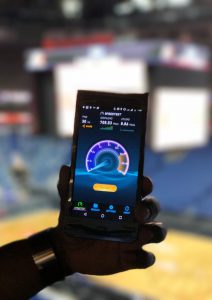 From the Sprint press release, Qualcomm themselves, and various Twitter accounts we can ascertain the basics of the 2017 iteration of the much-heralded Moto Z. The phone used for the 5G demo was a Motorola phone “based on the Qualcomm Snapdragon 835 mobile platform with an integrated Snapdragon X16 LTE modem, supporting Gigabit Class LTE”. This new Moto Z will include 4X4 MIMO (Multiple Input Multiple Output) and 256-QAM higher order modulation to achieve the blazing Category 16 LTE download data speeds. Anyone else notice the 700+ Mbps in the image above? Or the 600+Mbps download speed in the header image?

Here's the mystery Motorola phone coming later this year with four antennas. In a case and taped over. pic.twitter.com/vjrz3XnEAN

The phone used in the demo was inside a case and well taped up to hopefully not give too much away but it seems that Motorola may have “accidentally” shown it at MWC 2017 in the process of revealing the new Moto Mods. The device shown at MWC 2017 had a totally different-shaped fingerprint sensor to the 2016 Moto Z leading to the speculation that it is the upcoming (several months away no doubt) Moto Z 2017. Hopefully they bring this technology to Australia, with our carriers’ 5G testing and implementation well underway they should be able to support it. Motorola have never had the premium Snapdragon chipset in their flagships and yet still always produced an amazing experience and a blazing-fast phone. Imagine how good is should/could be with the much-vaunted Qualcomm Snapdragon 835. Motorola are not hiding the capabilities of the upcoming Moto Z and I for one am glad to see it.

Anyone’s interest piqued with a Moto Z running atop a Snapdragon 835, capable of 5G speeds? I know mine is.

Just wondering if they built it so the 1st gen mods will fit it or not. Also, amazing battery life like the z play Droid?

Sprint though, who cares.

It does look interesting but I would have to see how 5G kills the battery.