Welcome to what seems to be an almost daily leak train for the Samsung Galaxy S8, with more leaks appearing all over Twitter for the phone which won’t officially see the light of day until later this month.

The first leak comes from Twitter with a pic of the phone in the wild. The leak on this one loses points because it’s only the front of the device, but does seem consistent with previous leaks with the curved ‘infinity’ display and lack of front capacitive or physical buttons. The picture also shows the square home key we saw in the system dump from the Galaxy Tab S3. So, without further ado, here it is: 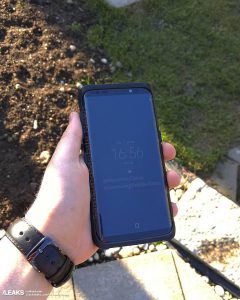 The next leak comes from well known skin maker, Dbrand, who announced their range of skins rather early for a phone not yet officially announced. Dbrand actually dropped a tweet announcing the upcoming skins.

As you can see the links in the tweet go to an order page which lets you skin the upcoming S8 or S8+ in Carbon Fibre, Stone, Matte, Metal, Leather, True Colour or Wood options. As usual you can order different coloured skins for different parts of the phone – front top, front bottom, rear and camera:

The model upon which Dbrand are applying the skins on their website appear very much in line with what we’ve seen in previous leaks for the S8 and S8 Plus. Here’s just a look at two of the skins on the S8/S8+:

Pricing is pretty standard for the skins, with a full set of rear, front and camera accents set to cost $16.80USD with a little delivery on top. It’s pretty easy to apply the Dbrand skins, so this may make a good choice for someone wanting to differentiate their new phone…when they eventually get it.

That’s it for today, we’re sure to have more leaks in the lead up to launch. We’ll get official eye’s on with the Galaxy S8 and S8+ when Samsung release the phone on March 29th in New York, you can join in on the live stream for the launch on Samsungs YouTube to get a first hand look at the hoopla surrounding a Galaxy S launch.

Dbrand makes any phone look so much more awesome. Damn!